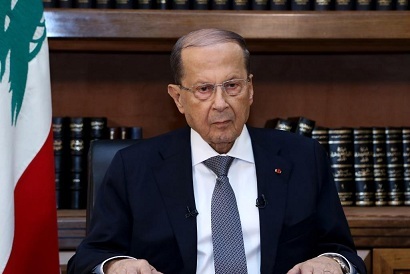 The new electoral law ensures the “most correct representation for all the components of the Lebanese people,” President Michel Aoun said on Wednesday.

“Political ambition is legitimate and a right for each one of you but avoid inciting sentiments and steer clear of religious and sectarian agitation,” Aoun added, addressing parliamentary candidates, in an address to the nation.

“Do not vote for those who pay you or offer you money, because those who buy you will later sell you,” the president went on to say, in a message to voters.

And addressing Lebanese expats, who will be allowed to vote outside Lebanon for the first time in the country's history, the president added: “Cling to your right to vote and let your participation reflect how much you are attached to your homeland.”

The new electoral law replaces a majoritarian system with a proportional one and allows Lebanese expatriates to vote abroad for the first time. Some 82,000 expats have registered to do so.

Is this man for real?

Why doesn't Naharnet mention Article 24, which means half of the seats go to "Christians", so you know who won the election before anybody votes? Is Naharnet ashamed of this pseudo-democracy? Or is Naharnet's readership shrinking to that "Christian" minority, and this is the last thing it wants to read about? "If you asked your father for a loaf, would he give you a stone?" This can't go on much longer.

why are you so anti Christian, 'Chris'?

Aoun addressing candidates: Political ambition is legitimate and a right for each one of you but avoid inciting sentiments and steer clear of religious and sectarian agitation.

He forgot how he was inciting sentiments stirring up sectarian agitation when he was 'democratically' running for president.

that's exactly what his son in law bassil is doing.

Yesterday we had the head of the Amal sectarian militia talk about sectarianism and today we have the the king of incitement and sectarianism lecture the Lebanese about the very same evils that made both of these creatures who they are today: corrupt evil criminal sectarians.

Basically don't do what I did and continue to do....

Basically he is stating don't do as I did and continue to do!!!

Does this traitor even know the meaning of the word 'Sovereignty'?!