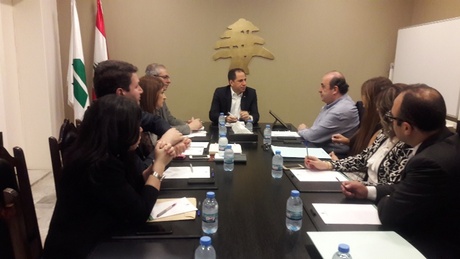 As part of coordinating efforts to counter a controversial naturalization decree granting Lebanese citizenship to foreigners, lawyers of three political parties met on Tuesday at the Kataeb headquarters in al-Saifi, the National News Agency said on Tuesday.

Lawyers from the Kataeb party, Lebanese Forces and Progressive Socialist Party held talks to discuss the law that is yet to be disclosed.

It comes one day after the same parties dispatched delegations to the interior ministry asking for a copy of the decree which raised criticism.

After the meeting Gemayel said: “Kataeb MPs have met with Interior Minister Nouhad al-Mashnouq yesterday who issued a statement saying the decree will be announced in 48 hours and the names to be granted the citizenship will be disclosed. We hope to get an answer tomorrow.”

Gemayel said getting a copy of the decree is a “priority so that we can study it and give an opinion about it. In order to take any legal or constitutional step we need to have the full text and names.”

The law signed by President Michel Aoun reportedly grants citizenship to some 300 people mostly including names of Syrian figures close to Syrian President Bashar Assad who are also subject to US financial sanctions, to Palestinians, Western and Gulf businessmen, as well as a number of stateless applicants.

The decree has provoked criticism, especially since it will be issued by a caretaker government.