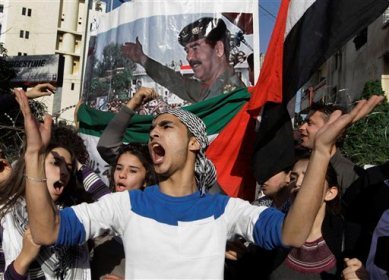 Security forces on Friday closed all the roads leading to the U.S. Embassy in Awkar because of a nearby rally that was held in celebration of the American withdrawal from Iraq, reported Voice of Lebanon radio.

A statement from the demonstrators praised “the Iraqi people and their resistance that contributed to the country’s liberation.”

“The withdrawal is a victory for the people’s perseverance and a political and national response to all who thought that the occupation and invasion would break the will of the mighty Iraqi people,” it stressed.

Free Lebanon radio also reported that a number of pro-Syrian regime youths gathered near the embassy amid a heavy security presence.

The 2003 U.S. invasion of Iraq toppled the regime of Saddam Hussein, who was tried and executed in 2006, and a "surge" of 20,000 additional U.S. troops in 2007 helped to contain a rash of sectarian bloodletting verging on civil war.

The U.S. withdrawal earlier in December ended a war that left tens of thousands of Iraqis and nearly 4,500 American soldiers dead, many more wounded, and 1.75 million Iraqis displaced, after the invasion unleashed brutal sectarian killing.

How come the scum of the Iranian/Syrian/Palestinian/Iraqi/etc people end up in Lebanon???

what the hell is wrong with this picture....

is Lebanon some kind of an open field that everyone can take their turn and play their stupid games...

This is excatly what happens when the politicians sell their honor (assuming they had it to begin with) to the highest bidder...

Funny, the 'resistance' that supposedly kicked the US out of Iraq spent more time killing other Iraqis than Americans and this is continuing now between the different militias there. How were they forced to leave when the US stayed for 8 years, brought down the Saddam government, destroyed the Baath party and ended the Al Qaeda in Iraq almost entirely and left peacefully and not under attack?