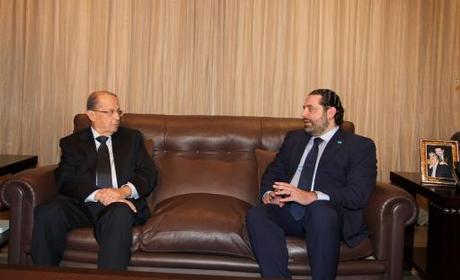 “One of the ideas must be unavoidably endorsed, or else we will have a problem with everyone impeding the formation of the government,” the sources added.

“Everyone is facing a decision week and we have offered all the possible facilitation and we cannot wait any longer,” the FPM sources went on to say.

Informed sources meanwhile told al-Akhbar that Aoun has told mediators that he “will not be very patient” after the Arab economic summit and that he would ask Hariri to take his “final decision.”

“He (Hariri) is before a practical solution based on the 32-minister format with a pledge that the appointment of an Alawite minister will not be turned into a norm. If he decides to reject it, he will have to present an alternative solution, or else Aoun might seek the intervention of parliament,” the sources added.

The proposed solution “allows the president to replace the Sunni seat with a minorities minister (Syriac candidate Habib Ephram) while Hariri would choose the Alawite minister (the candidate Ali Darwish of ex-PM Najib Miqati's bloc),” the sources said.

The Hizbullah-backed Sunni 'Consultative Gathering' would meanwhile pick “a figure with clear political affiliation,” according to a member of the Gathering.

Al-Akhbar also reported that General Security chief Maj. Gen. Abbas Ibrahim could resume his role as a mediator should the President's camp reach a “unified stance.”

“It turned out that he had decided to stop his mediation and express dismay because he was leading a dialogue with Hariri based on an agreement with Aoun before Hariri told him that Bassil is speaking of other things,” the daily added.

BS headline based on a BS Al-Akhbar leak designed to cover for Nasrallah's ongoing obstruction and refusal to give Aoun the blocking third. The 32 idea is Nasallah's. He tasked Bassil with promoting it when he summoned him to Dahieh last November 9, a day before the government was to be announced. During that meeting Nasrallah insisted Bassil does what he's told. When Aoun and Bassil tried to circumvent it with the convoluted Jawad Adra nomination it blew up in their faces. Nasrallah knows that the 32 or 34 cabinet will not fly. It's just a another one of his obstruction tactics. Many blocks are against it as is Hariri and even many members of Bassil's own block. Chamel Roukoz, Simon Abi Ramia and Neemat Frem are overtly strongly opposed. Now it's basically a game of chicken and who's going to crack first.