Egyptian Demonstrators Conflicted over US Role 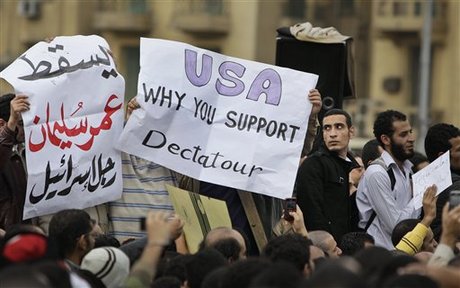 One of the insults flung at President Hosni Mubarak by Egyptian protesters seeking his ouster: "Mubarak, you coward! You American collaborator!"

Hostility toward the United States is widespread among the crowds in Cairo's streets, who feel Washington's alliance with Egypt — along with billions of dollars in military aid over the years — has helped Mubarak's authoritarian regime keep its grip on power for nearly 30 years.

But there's also a yearning for U.S. support.

Among the tens of thousands of Egyptians who have gathered in Cairo's main square over the past week, there's a widespread belief that the administration of President Barack Obama could be a key factor in helping to push Mubarak out. So behind the angry chants, there are hopes for solidarity.

"America has to support us — not the oppressors of the people," said protester Abdel-Salam Hassan, a 51-year-old unemployed man.

"The Americans believe in democracy. Now they have to show us," said Hassan, who stood in Cairo's downtown Tahrir, or Liberation, Square, a focal point of protests against economic hardship, government corruption, police brutality and political restrictions.

Washington has urged Mubarak to allow an orderly transition to democracy, giving a strong impression that it believes he will have to go. But it has not called outright for him to step down, and it has seemed wary of chaos and a power vacuum if he leaves. Obama administration officials say Washington is pressing Mubarak to institute a set of key reforms, including a lifting of emergency laws in place since 1981 and the holding of credible presidential elections in September, preferably without the 82-year-old leader as a candidate.

The demonstrators have a multilayered perception of America, a reflection of the complicated feelings widespread among the Egyptian public, where many often express respect for freedoms they see in the United States but anger at what they see as domineering policies in the Middle East.

Egyptian police pummeled protesters with tear gas, rubber bullets and in some cases, live fire, in the early demonstrations that erupted a week ago, many of which turned deadly. But demonstrators said they believed the police response would have been even more violent were it not for strongly worded calls of restraint by Obama and Secretary of State Hillary Rodham Clinton.

They noted with bitterness, however, that some of the weaponry used against them appeared to be U.S.-made.

"Look at this!" one man shouted in a makeshift emergency room in a mosque near Tahrir Square on Saturday, as doctors treated bleeding demonstrators and other volunteers removed the bodies of slain protesters. He held up tear gas canisters emblazoned with "Made in the USA."

Another man shook a fistful of bullet casings at reporters. "America! This is America!" he shouted.

A military helicopter that swooped over Tahrir Square, as well as warplanes that roared across Cairo's skies on Sunday, highlighted the conundrum once again. Protesters shook fists at the two low-flying planes and declared that they were obtained with U.S. military aid.

The United States gives some $1.3 billion in military aid to Egypt every year, along with $200 million in economic aid. But the aid is viewed by many Egyptians with mixed feelings, seeing it as a tool to keep their country's government subservient to American foreign policy — for example by supporting the U.S.-led invasion of Iraq in 2003 and by maintaining ties with Israel.

The United States has often called for reform and an end to abuse in Egypt — and for a period in the mid 2000s it hiked up the pressure, seeking to make Egypt a showcase for a policy of greater democracy in the Middle East. But the pressure eased. Many in Egypt believe Washington shelved the demands to ensure Mubarak's secular government as a close ally in efforts to contain Islamic extremism and deal with regional issues.

To ensure that stability, they say a succession of U.S. administrations has tolerated Mubarak's tightening grip on power, including elections believed to have been rigged and indications that he may have been grooming his son, Gamal, to succeed him.

"America is worried about instability in Egypt, so they'll try find a new leader they like and anoint him to work for their interests," said Muslim preacher Ahmad Abdullah, 40, who was sleeping in Tahrir Square.

"They will keep stepping on our heads," he said.

The U.S. is in a further bind, said political activist and analyst Mohamed el-Dahshan.

Egyptians have long viewed any foreign inference in their affairs with deep resentment — even if it matches their own goals, el-Dahshan said. He noted that U.S. pressure helped secure the release of several jailed human rights activists over the past few years, though at the same time the pressure tarred them among some Egyptians as American stooges.

The U.S. has refrained from outwardly supporting Mohamed ElBaradei, an opposition leader and Nobel Prize laureate whose frequent travel in the West has tainted him with suspicion among some Egyptians.

"People are aware the current regime can't survive without the support of the Americans," el-Dahshan said. "But they are hoping that (the United States) will allow Mubarak to be toppled, and then stand aside."(AP)