What Countries are Doing to Repatriate IS Families 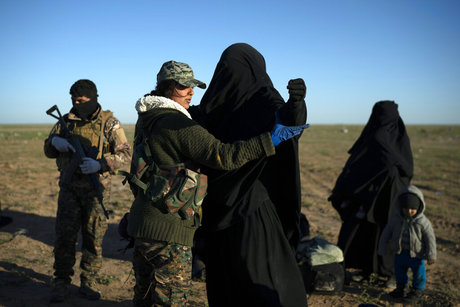 Since the fall of the Islamic State's "caliphate" in March, the international community has been torn over what to do with the families of foreign jihadists captured or killed in Syria and Iraq.

The Kurdish authorities are pressing for them to be returned to their countries of origin.

Here are several examples of how countries around the world are dealing with the issue:

Nearly 4,500 Russian citizens went abroad to fight alongside the IS and it was the first to organise returns over a year ago.

By February around 200 women and children had returned, originating mainly from Russia's Islamic republics in the Caucasus. Moscow estimates that nearly 1,400 children are still stranded.

Kosovo, which is 90 percent Muslim, announced in April it is repatriating 110 nationals from Syria, almost all of them wives and children of jihadists.

After months of hesitation amid hostile public opinion, 12 orphaned children of French jihadists were flown home from Syria on Monday.

France repatriated five orphans from Syria in mid-March, as well as a three-year-old girl whose mother was sentenced to life imprisonment in Iraq.

Paris has said it is studying the files of all its citizens held in northeastern Syria on a case-by-case basis.

Like France, Belgium has been one of the biggest sources of foreign fighters for IS.

The authorities recorded more than 400 travelling from 2012 while 160 children and adolescents have been born with at least one Belgian parent involved.

Belgium says it will help the repatriation of children younger than 10, as long as the link with a Belgian parent is proven. "For the others it is case by case," the government says.

A dozen children of jihadist fighters have been repatriated from Iraq to Germany since March.

The German authorities, while cautious, say that the children are "victims" and that they should be repatriated if they have family to take them in.

Children who have been radicalised will be placed in a special institution but will not be locked up.

The Danish government in late March drew up draft legislation under which children born abroad to jihadists will not have Danish nationality.

United StatesThe United States has urged Western countries to take their nationals back and has started repatriating some of its own.

Two American women and six children from families of suspected IS members were repatriated in early June.

In July 2018 Washington brought home three IS fighters for prosecution and also repatriated one woman with her four children.

Tunisia: no repatriationSome 5,000 Tunisians have joined the IS in Syria and Libya, according to the UN in 2015 -- one of the biggest contingents.

No children have been brought home from Syria or Iraq, according to Human Rights Watch in February.

Tunisia's government worries that repatriating children will only accelerate the return of their jihadist parents, according to a local rights group, the Rescue Association of Tunisians Trapped Abroad.

Turkey In late May, Iraq repatriated to neighbouring Turkey 188 children of Turks accused of belonging to IS, a capital offence in Iraq.

Tajikistan, from where more than 1,000 travelled to fight for IS, said in May that 84 children had been brought back from Iraq, where their parents had been either jailed or killed in battle.

On May 30, Uzbekistan said it had repatriated 156 nationals, mostly women and children.