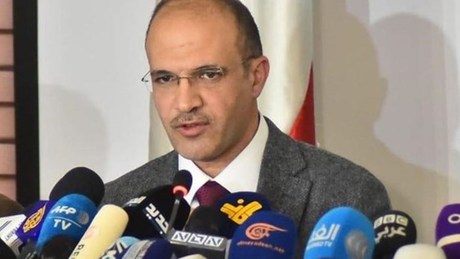 Health Minister Hamad Hasan on Friday warned that the COVID-19 coronavirus is no longer in the containment phase in Lebanon after “four cases of unknown source” were recorded.

Hasan voiced his remarks at a press conference he held at the Bouar state-run hospital after inspecting several government hospitals.

“All state-run hospitals have proven that they are the second line of defense – the first is the family,” Hasan said.

Noting that “an uncalculated development occurred over the past 48 hours,” the minister announced that cases from countries not listed as hotbeds of the virus have “leaked into our Lebanese society,” referring to a Lebanese man who visited Egypt and a Lebanese woman who was in the UK.

MTV reported that the cases confirmed in Lebanon on Friday include a nurse and a patient at the Notre Dame des Secours hospital in Jbeil who had come in contact with the Lebanese man coming from Egypt.

LBCI TV said five of the six cases confirmed on Friday had contracted the virus through contact with other patients and that the sixth case is being investigated.

The Rafik Hariri University Hospital said 87 individuals had been admitted into its coronavirus emergency section over the past 24 hours and that only 20 were kept in the hospital’s quarantined ward, as a precaution, based on the evaluation of the overseeing doctor. The others were asked to observe home isolation.

“Lab tests were conducted for 127 cases of which 121 tested negative and six positive,” it added.

Twenty people meanwhile were discharged from the hospital’s quarantined ward after testing negative while 19 remain in preventative quarantine.

Adding that 21 infected patients are now in the hospital’s isolation unit, RHUH noted that a patient is being quarantined at another hospital.

“The Iranian patient and the one transferred from the Notre Dame des Secours hospital are still in critical condition while the other 19 patients are in a stable condition,” the hospital added.

Coronavirus has infected more than 100,000 people across 91 countries globally, according to an AFP tally published Friday evening.

The death toll reached 3,406, while the total number of infections hit 100,002, after a surge in cases worldwide since Thursday at 1700 GMT, notably in virus hotspot Iran.

The figures were compiled from data collected by AFP offices from the competent national authorities and information from the World Health Organization (WHO).

Genius fake doctor---run around pretend you are doing stuff and let in thousands of passengers from Iran through flights in Beirut and Damascus.

What exactly did he expect?