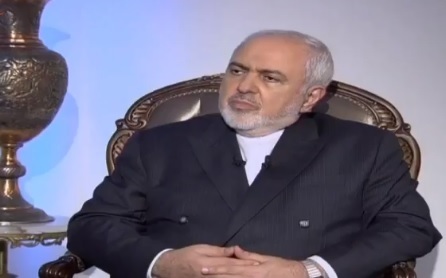 Iranian Foreign Minister Mohammad Javad Zarif on Friday warned that the presence of foreign warships on Lebanon’s coast represents “a threat to the Lebanese people and its resistance.”

“The presence of foreign warships on Lebanon’s coast is not normal and it is a threat to the Lebanese people and its resistance,” Zarif, who is on a visit to Lebanon, told al-Mayadeen television in response to a question about the issue.

A French warship and a British warship have recently docked in Lebanon as part of the aid and rescue efforts.

“The deployment of HMS Enterprise complements an immediate package of military and civilian support. As part of the strong relationship between both our armies, the UK has offered enhanced support to the Lebanese Armed Forces, who are central to the Government of Lebanon’s response, including tailored medical help, strategic air transport assistance, and engineering and communications support,” Lt. Gen. Sir John Lorimer, the UK Defense Senior Adviser Middle East and North Africa, said during a visit to Beirut on Monday.

Separately, Zarif told al-Mayadeen that Iran does not endorse any specific candidate to lead the new Lebanese government.

“We will cooperate with any nominee that the Lebanese would agree on,” he said.

“I reassured Lebanese officials that Iran is ready to help and not to impose anything on Lebanon,” he went on to say.

And calling on the international community to “acknowledge Lebanon’s independence and stay away from its internal affairs,” Zarif said “if the Lebanese people allow those who don’t want Lebanon’s welfare to sow discord, fears will arise about Lebanon’s future.”

stfu! You don't speak for the Lebanese people. Go back to your filthy terrorist Iran.

I vomit when I see this bully. His rockets and Basij criminal Hizbillah militia Iran created is what transformed the most advanced and civilized city in the middle east to a failed miserable and hungry city living on begging and subsidy. He should be immediately put in prison until all Iranian arms of death are taken out of Lebanon and Hiuzb brought to Justice for crime against Lebanon. The Cedar Revolution and the Green revolution in Iran are the same and created by the most educated and productive sectors in both Countries. The Iranian radicals brutally suppressed the green revolution and imprisoned/killed the educated and intellectuals, while Hizb did the same in Lebanon. These are crimes against humanity!

I think next time he's flying over maybe his plane should be escorted by F-15 fighter jets and forced to land in Syria. Better yet maybe a drone a la Kassem Seleimani will be much better.

Mrs. libanaisresilient has earned my utmost respect and deepest admiration for its thorough knowledge of motherhood and its obligations.

One Shia troll being bashed
logged tagged and processed

Someone needs to meddle with Iran the same way that it is meddling with other countries.

Stop your bickering and work on bettering yourself and your immediate society in order to become a better Lebanon. You all need to learn a bit of tolerance. The way i see it is you all love Lebanon but in your own way.

Maybe if the US and Israel stop interfering in Lebanon it can grow. As it is, Israel is about to start bombing Lebanon and the US warships are there to make sure that Hezbollah doesn't bomb Israel back. I see that none of the above comments are written with any awareness of what is actually taking place. Give yourselves up to the history of the past 50 years of what has taken place.