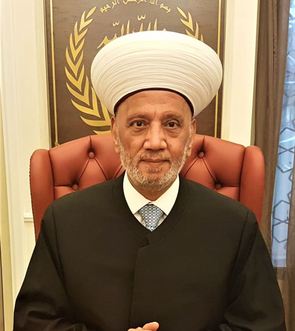 Grand Sunni Mufti of the Republic Sheikh Abdul Latif Daryan called on Wednesday for an international investigation into the colossal Beirut port blast, and a "radical" change to the country’s authority including early elections and formation of an emergency government of specialists.

“Existential threat against Lebanon, the homeland and the state requires urgent measures including an international investigation to determine responsibilities and restore confidence,” said Daryan in remarks marking a new Hijri year.

The Mufti said the explosion day on August 4 is a “black day in the history of Beirut, Lebanon and the Levant.” But Daryan sounded astonishment at the “ruling authority’s absence from what has befallen upon the people. What kind of dreadful attachment to power is that?” he asked.

The Mufti stressed the need for “a radical change in power,” in Lebanon that must include “early parliamentary elections based on an appropriate electoral law to guarantee freedom and integrity.”

Daryan said President Michel Aoun must hold “swift parliamentary consultations to name a PM and hence form an emergency and neutral government composed of specialists in order to address the disaster after Beirut’s deadly explosion, and stop the economic collapse,” to prepare the country for a better future, he said.

Turning to the U.N.-backed Special Tribunal for Lebanon which on Tuesday convicted one member of Hizbullah in the 2005 assassination of former PM Rafic Hariri, Daryan said the new government must enforce the tribunal’s verdict.

“One of the tasks of the forthcoming government is to enforce the judgment issued by the International Tribunal in the case of the assassination of martyr Prime Minister Rafic Hariri,” he said.

“It is an international court to achieve justice and save Lebanon from losing its sovereignty. The assassination of Prime Minister Rafic Hariri and the other martyrs necessitates the pursuit of salvation from uncontrolled weapons, otherwise no country or state can stand upright,” said the Mufti.

On calls to neutralize Lebanon from regional conflicts, the Mufti said: “We may not need neutrality if we establish a strong and just State reinforced by unity, social cohesion, justice, and crowned with safe coexistence.

“What is the value of neutrality if officials do not give weight to the concept of independence and sovereignty?” he asked.

Another billion $ to go for waste. Get those useless intelligence department and lazy Lebanese judges working instead. If they fail in delivering, then fire them all.
The money is worth spending on rebuilding. After firing all those failed without any retirement payout, at least we can save money to reconstruct. Give the a deadline of 6 months to provide answers. Else, make them accountable for the failure at least once. If it true that Oueidat know about, he should be questioned immediately by Sawan. 3lse, replace Sawan for conspiracy

It must be Oueidat!!!! I belives FPM cretin port guy Badri Daher who is friends of Gebran Bassile future cretin president of Lebanon tells Sawan. Cretin leader defends Badri Daher of corruptione many years now must cover up. Must!!!

dude what are you talking about. stop your non-sense.

Yesterday it the Batrak, today the Mufti, tomorrow will be Higher Islamic shiite Council, day after will Druze Spiritual leader, then Orthodox Church her Elias Aoude and the list goes on and on... and they tell us they want to end sectarianism.

I have never seen a country where so many religious heads or clergy be so involved in politics and day to day affairs of a country.

Here's a thought why don't all the religious heads of the 18 confessions form a committee and let them run the country. No president, No PM, No Parliament.

too late. the site has been temperd with and is compromised.

Unfortunately, the religious leader seem to be more moderate these days than all the heads of political parties, and l mean all. Lebanon has been turned upside down. I wonder how much the followers of all political parties have unwittingly or knowingly contributed to the failed state of Lebanon. People of sects, please wake up,

The Mufti and the Maronite Patriarch are wise and realistic. Their demands echo those of the overwhelming majority of the Lebanese people.