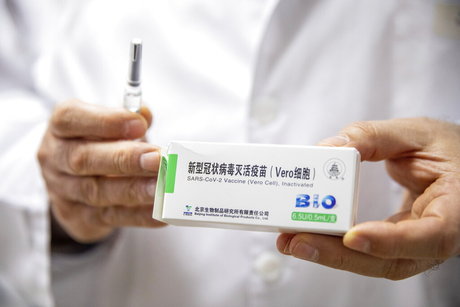 The committee has been tasked with discussing the registration of vaccines submitted by the private sector.

Following the EUA, private companies can now sell the vaccine in the Lebanese market according to applicable regulations.

The decision was taken in a meeting chaired by Hassan and attended by the committee’s members -- Dr. Abdul Rahman al-Bizri, Dr. Maroun Zoghbi, Dr. Rony al-Zaani, Dr. Thuraya Dumyati, the representative of the Lebanese University Dr. Nazih Abu Chahine and the head of the pharmacy dept. at the Health Ministry, Dr. Colette Reaidi.

The Ministry had granted emergency use authorization for the Russian vaccine Sputnik V on February 5.

Lebanon’s national vaccination campaign began Feb. 14 and has been criticized as too slow and riddled by violations.

The World Bank has allocated $34 million to inoculate an initial two million of Lebanon's six million inhabitants free of charge with the Pfizer-BioNTech vaccine.

The Chinese vaccine is alright if we receive the real deal.
The Chinese elite which includes the CCP members ordered 8 million doses from Pfizer for themselves.
There are many documented cases where the needles only contain water and a saline solution.... there’s a lot of fraud going on in China.

Lebanon being another country of fraud.... I’d think twice before injecting myself with the sinopharm stuff. The Russian Sputnik V doesn’t have this problem...