Hariri Back in Beirut, Lavrov Supports Formation of 'Mission-Driven' Govt. 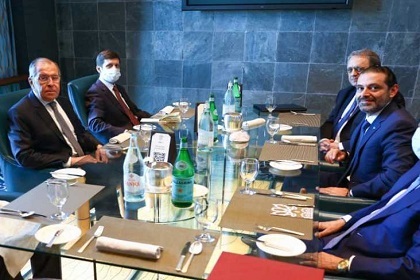 Prime Minister-designate Saad Hariri returned Tuesday evening to Beirut after a visit to the United Arab Emirates during which he met with the Russian Minister of Foreign Affairs Sergei Lavrov.

The Russian Foreign Ministry meanwhile announced in a statement that “views on how to put an end to the tense situation in Lebanon were thoroughly discussed, with emphasis on the importance of rapidly ending the social and economic crisis by forming a capable mission-driven government of technocrats.”

The statement added that the meeting also focused on the support of the main political parties in the country for this mission.

“Discussions also tackled some regional problems, including the intensification of the efforts of the international community to find a solution to the Syrian crisis based on UNSCR 2245, especially the return of Syrian refugees to their country,” the statement said.

Also, new ideas were discussed to “consolidate the Russian-Lebanese friendship and develop trade, investment and social exchange,” while focusing on “Russia’s assistance to Lebanon in combating the coronavirus pandemic.”