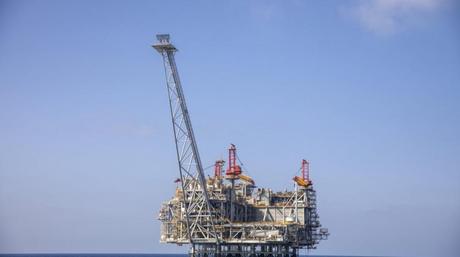 At a time when Lebanon is "fighting" to fully secure its southern maritime border rights through indirect negotiations with Israel, the confusion came from Syria which seems to be “infringing” on thousands of kilometers from Lebanon’s northern borders, al-Hadath television station reported on Friday.

A few days ago, the Syrian government signed a four-year agreement with the Russian Capital company, according to which it would conduct survey and exploration of oil in areas belonging to Lebanon, said the station.

The contract concluded between Damascus and the company in Block No.1 on Syria’s border evidently shows the Syrian border overlapping with Block No.1 and Block No.2 from the Lebanese side.

But the Lebanese state, represented by its caretaker Foreign Minister Charbel Wehbe, said he sees no breach of the maritime border, describing the reactions as “exaggerated.”

“The case is more than nine years old when Damascus demarcated its maritime border with Lebanon in its own way, and Lebanon did the same awaiting bilateral negotiations to resolve the dispute over maritime points. There is no Syrian aggression, this is totally out of the question,” said Wehbe in remarks to al-Arabiya net.

"The Russian company will start exploration in the Syrian part of Block No.1, it will not start in the Lebanese part, this is a right for Syria. As for the other part of the block located within a disputed area with Lebanon, resolving it needs to be negotiated between the two countries,” added Wehbe.

He said Lebanon will soon make an official position in that regard.

In 2011, Lebanon demarcated its maritime borders with neighboring countries, and Syria did not issue any position until 2014. Through its ambassador to the United Nations Bashar al-Jaafari, Syria raised an objection to the Secretary-General of the United Nations.

Jaafari considered that Lebanon needs no legally binding effect towards other countries, because the move was an internal legislation issued in accordance with Lebanese laws.

Lebanon responded to the Syrian position by contacting the Syrian government and asking it to start negotiations to resolve the dispute over the sea points, while recording its objection to Syria’s demarcation of the maritime borders.

In 2013, Lebanon launched the first round of primary licensing and invited bids for Block No.1 in the north. But Syria at the time said it doesn’t recognize the Lebanese demarcation.

“There is an overlap in the maritime borders between Lebanon and Syria, which is clearly visible in the demarcation map of the blocks,” said Laury Haytayan, Lebanese oil & gas expert in the Middle East and North Africa.

"The overlap extends to an area of ​​750 square kilometers, and therefore Damascus has no right to start the exploration process before the border dispute is resolved. The Lebanese government must preserve its maritime rights recognized by the United Nations through launching negotiations," she told al-Hadath.

For his part, expert in the border maritime conflict, former head of the Blue Line Committee, Lebanese Armed Forces (LAF) Brigadier General Antoun Mourad said: “Syria’s move is an evident violation of the Lebanese border because it has no right to take a unilateral decision before resolving the issue with Lebanon".

“Syria uses the logic of force in this issue, official Lebanon must respond,” he added.

Antoun said Hizbullah has been fighting alongside the ranks of the Syrian regime and therefore is capable of using its good relations to improve Lebanon’s position and preserve its maritime border rights.

But Bassil wrote more than 20 letters and nobody listened to him....

He should have informed hezbollah and they would have immediately liberated the disputed area since hezbollah never compromise when it comes down to sovereignty:)

"Lebanese state, represented by its caretaker Foreign Minister Charbel Wehbe, said he sees no breach of the maritime border, describing the reactions as “exaggerated.”"

This is high treason . He must be arrested NOW!

But Bassil who is in the same camp as Hezbollah wrote letters and failed to communicate properly?

So the same side is not agreeing same as can't form a government.

"At a time when Lebanon is "fighting" to fully secure its southern maritime border rights through indirect negotiations with Israel,"
When exactly were the last meetings on this matter. I don't see Lebanon "fighting" but simply ignoring.

Check which leader sold the land. Lebanon could be the richest country on earth, But it is run by corrupt politicians and blind people that allow them to get away with it. All the people do is whine and complain yet they allow these criminals to rule the country.

lots of talk, no action in lebanon. this is how you loose the upper hand in negotiations. If lebanese politicians were working for the lebanese people, they would take action by starting to explore in Block two, on the Syrian side... watch them run to negotiate. But I doubt that would happen like that, I'm sure Hizballah would kill whoever dares to do a ballsie move like that instead of being the true "revolution" to liberate lebanese sovierenty.

We've had leaders sold to the Assads for too long...

wonder which politician sold that part.