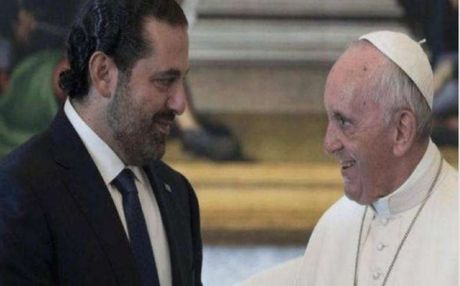 Pope Francis met Prime Minister-designate Saad Hariri in the Apostolic Palace at the Vatican where talks highlighted the role that the Vatican can play to help Lebanon, the press office of Hariri said in a statement on Thursday.

Discussions highlighted “Lebanon’s historic relations with the Holy See, and the role that the Vatican can play to help Lebanon face its crises,” added the statement.

The Pope received Hariri who was accompanied by his advisers, ex-Minister Ghattas Khoury and Bassem al-Shabb.

The PM-designate presented the Great Pontiff with a souvenir of art.