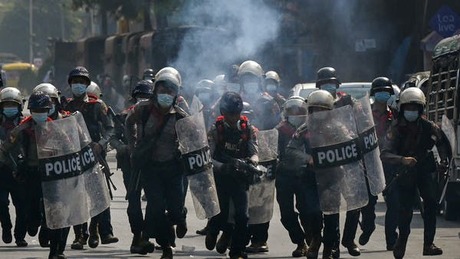 Police used tear gas to break up a gathering in a southern district of the capital N'Djamena, an AFP reporter said, adding that security forces had fanned out across the city.

A small group of people burnt a French flag in a northern area. France, Chad's former colonial ruler, was a traditional backer of Deby and is seen by some as supporting the junta that seized power after Deby's death.

The Transitional Military Council (CMT) took charge on April 20, the day that Deby's shock death was announced. It is headed by Deby's son Mahamat, a four-star general.

Protests broke out almost immediately and have been brutally quashed, resulting in six deaths according to officials, and nine according to NGOs.

Over 600 people have been arrested.

Mahamat Idriss Deby has pledged to hold "free and democratic" elections in 18 months. He has named a transitional government that is overwhelmingly dominated by ruling party figures and stalwarts of the old regime.

Chad claims that the Front for Change and Concord in Chad (FACT), a large armed group with a rear base in Libya which mounted an offensive on April 11, is retreating after a government offensive.