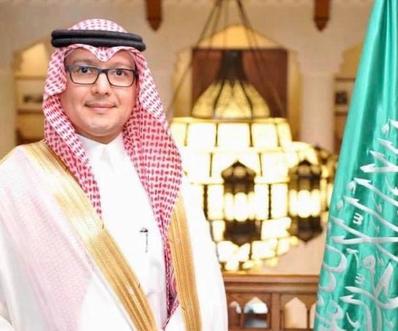 Saudi Ambassador to Lebanon, Walid al-Bukhari on Wednesday affirmed in a chat with journalists that everything being said about Saudi Arabia’s endeavors to deport Lebanese nationals from its territories against the backdrop of its minister's remarks were “absolutely unfounded.

“In the midst of the Gulf War, the KSA never deported anyone because it was built on humanitarian foundations,” Bukhari said.

He recollected that when he had gone to the KSA to receive his Coronavirus vaccine, he found Lebanese families queued before him after having registered their names.

“This is something that pleased me because my state did not differentiate between a citizen and a resident — neither with regard to waiting in line nor with regard to the type of vaccine,” he explained.

Bukhari finally expressed the belief that what had won the kingdom the respect of the international community was its unified language and political discourse, in public and in secret.

" its unified language and political discourse, in public and in secret."

in a clear dig at Aoun and his party.

It is important to remember that the most pro-Palestinian US presidential candidate in 2020 was Jewish Bernie Sanders who called Netanyahu a bigot and racist. Israel has many politicians similar to Sanders but Hizbollah and Hamas insured they never get to power as this defeats their goals. Many close elections in Israel and Palestinian should have been in government long time ago moving the region towards permanent peace if it wasn’t for Hizbollah and Hamas insuring Netanyahu get elected every time. Hizbollah, Hamas and Netanyahu are sides of the same coin, surviving on building hate and rockets, killing their own people for political benefit. They depend on each others for survival and insuring hate and destruction will keep them in power and allow them to indoctrinate and control people lives. They are all criminals and we’ll never see real peace until we get rid of them.

To Hamas’ credit, they didn’t start the shooting. IDF soldiers did in East Jerusalem, they targeted thousands of worshippers and started messing around the Damascus Gate. And there’s a huge difference between Hamas and Hezbollah, they don’t have terrorist cells around the world because they’re nothing more than a local resistance. I don’t adhere to their rhetorics at all, they’re despicable, but nonetheless they are a legitimate resistance organization. Sure, they’re anti democratic, but the Fatah alternative is no better either. The palos are pretty hopeless.

Salute to brave and courageous Lebanese fighters who liberated South Lebanon in 2000. Sadly they did not know that they were not fighting for Lebanon’s independence, freedom, sovereignty and prosperity but rather for Lebanon occupation by the Basij, brutal oppression, degrading dependence and economic ruin. Salute to brave and courageous Palestinian fighters who stood up to Netanyahu’s criminal intents in 2021. Sadly they do not know that they are not fighting for Palestinian’s independence, freedom, sovereignty and prosperity but rather for total occupation by the Islamic brotherhood, physical and mental control, systematic oppression, curtailed liberties, degrading dependence on foreign aid, and economic ruin with all resources and thoughts controlled by Hamas elites. Sadly they are empowering a radical militia over state institutions and won’t realize Hamas is taking them to Hell until too late to escape.