Reports: No disagreements between Aoun-Miqati, Govt. Formula not Discussed Yet 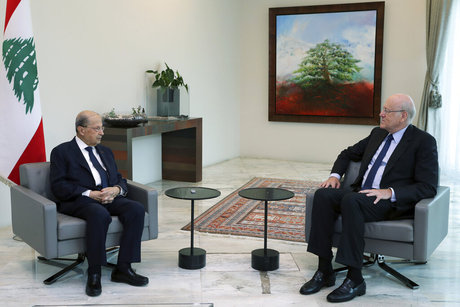 President Michel Aoun has agreed with Prime Minister-Designate Najib Miqati "to expedite the new government's formation,” media sources said, adding that they have not yet discussed “the details of the government's composition.”

Sources close to the Baabda Palace revealed, in remarks published Tuesday in several newspapers, that "Aoun and Miqati have not yet gone into the details of the government's line-up, the distribution of portfolios, or any other issues related to the formation mechanism," but have “agreed on expediting the government formation.”

The sources stressed that "all reports about the existence of disagreements over portfolios are baseless, especially since the government composition has not yet been discussed between the president and the Prime Minister."

They warned about the intentions behind spreading such rumors that are “harmful to the course of government formation.”

“The purpose of these rumors is to cause a deliberate controversy and to fabricate points of disagreement between the president and the new PM,” the sources said, assuring in return that “the cooperation between Aoun and Miqati guarantees reaching the desired goal within the well-known constitutional rules.”

4 minutes ago Armenian MPs from parliament: We have not named PM-designate Miqati but we want to take part in the government, and our decision is different than that of the Strong Lebanon bloc.

What kind of logic is this???

Indeed, some of us have Arabian, Turkish or Iraqi family names but none consider themselves as belonging to a foreign country. The Armenians have been in Lebanon since 1915, they’re no longer refugees, they’re Lebanese .

Does Armenia have Lebanese MPs in its Parliament? I doubt it:)!

These people live on a different planet. Miqati says he intends to form a government in accordance with the French initiative comprised of independent specialists and every party says they support the initiative. Yet, every party wants to have ministers in the cabinet!

What a Joke. Wasn't this PM a part of the problem and now he is back. LMAO. Lebanese do deserve what they get.

Wait until Basil comes and spoils everything.