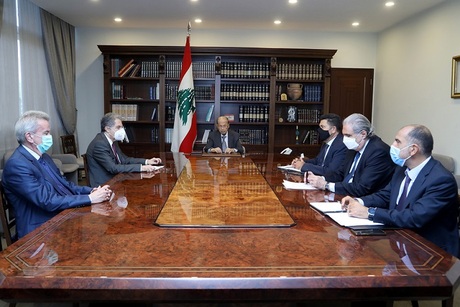 President Michel Aoun held a meeting Thursday with Central Bank Governor Riad Salameh and the caretaker ministers of energy and finance, hours after Salameh announced the end of fuel subsidies in a controversial move.

The Presidency said Aoun stressed during the meeting that Salameh’s decision “has dangerous social and economic repercussions.”

“The subsidization of fuel will not return to the previous state and what is happening now is an attempt to agree on a new (dollar) exchange rate at which subsidization would take place in order to open (new) lines of credit by the central bank,” al-Jadeed TV reported.

LBCI television meanwhile said that no agreement was reached at the meeting and that Salameh insisted on halting fuel subsidization “unless parliament issues a legislation legalizing spending from the (central bank) reserves.”

So it turns out it was all an orchestrated song and dance.

Yeah, keep the fuel subsidies so smuggling remains a viable business for the thugs raping Lebanon since the 1980s.