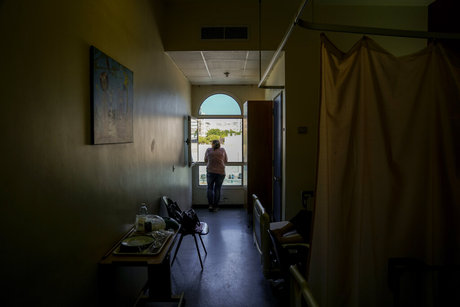 The phones at Lebanon's only suicide hotline hardly ever stop ringing as people grow more and more desperate in the face of a financial downturn that has spurred a mental health crisis.

In one call, a father says he is thinking of taking his own life because he is unable to feed his children, and in another, a man recently made homeless says he has lost all hope.

There are dozens of such calls every day, and around 1,100 a month, in a nation that has seen an exodus of healthcare specialists and shortages of drugs to treat anxiety, depression and psychosis.

The number of people phoning in has more than doubled since last year, and is expected to continue to grow in the coming months as hopes dim for a battered population pushed to the brink by a seemingly endless succession of woes.

One morning this month, "we woke up at 5:30 am to a call from a 31-year-old who is homeless" and feeling suicidal on Beirut's east-west flyover, said Mia Atoui, the co-founder and vice president of Embrace, the NGO that runs the hotline.

Before that, the organization got a call from a dad living in Lebanon's Bekaa Valley who was feeling suicidal because he had four kids he could no longer afford to feed, she added.

"We are receiving similar calls every day... the crisis has worsened enormously."

Atoui said higher demand had prompted the organization to extend hotline operations to 21 hours a day, up from 17, with the aim of reaching 24 hours in the coming months.

A free therapy clinic run by the organization is fully booked until October, with more than 100 people on the waiting list.

The number of children phoning in has also risen, with people under the age of 18 accounting for 15 percent of callers in July, up from less than 10 percent in previous months.

"A lot of people have lost hope," Atoui said.

Since the start of the country's financial crisis in 2019, the triggers for emotional distress have kept piling up, with the coronavirus pandemic and a monster blast at the Beirut port last year stretching a nation's psyche to its limit.

The past four months have seen Lebanon land on even tougher times, with dwindling foreign currency reserves sparking shortages of key imports including fuel, medicine and bread amid around-the-clock power cuts.

With hospitals going out of service and schools at risk of closing down, Lebanese have fled the country en masse, leading to an epidemic of loneliness on top of the misery that now plagues daily life.

Fadi Maalouf, the head of the psychiatry department at the prestigious American University of Beirut Medical Centre, said he has seen an upsurge in the load of patients coming in for treatment.

"We are definitely seeing more anxiety and depression, but also more advanced conditions," he said.

The situation, Maalouf said, had been worsened by a dual dilemma.

The bulk of mental health specialists have left, leaving patients struggling to find expert help, while shortages of antidepressants, mood stabilizers, and anti-anxiety medication have interrupted treatment for many.

"We saw patients who cut down on their treatment so that the supply they have would last longer, and they came to us in our outpatient clinic with a worsening of their condition," Maalouf said.

"We even saw patients who decided to stop their treatment and they become more severely depressed, even suicidal, and they ended up in our emergency room," he added.

"These are all patients who were previously stable."

With demand on the rise, clinical psychologist Nanar Iknadiossian is struggling to keep up.

The 29-year-old works for 13 hours a day in back-to-back sessions and still receives new referrals she is unable to take on.

The pace at which the crisis is worsening requires "very quick solution-focused approaches" to therapy, she told AFP.

"It's like psychological first aid... we are just doing damage control."

"Last month, we received a call from a widowed mother who has three kids she can't afford to feed," said Magalie Eid, a 23-year-old volunteer operator at Embrace.

Boushra, a 26-year-old volunteer operator who asked to be identified by only her first name over privacy concerns, said her job now feels like "mission impossible".

"We are supposed to give hope in a country where hope does not exist."