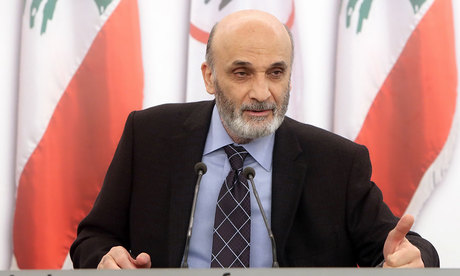 Lebanese Forces leader Samir Geagea on Friday commented anew on the the Military Court’s decision to summon him for testimony regarding the deadly Tayyouneh-Ain al-Remmaneh incidents.

“As the head of a legitimate Lebanese party, I’m under the law,” Geagea tweeted.

“But for justice to be correct, the judiciary must deal with all parties in the country as them being under the law,” he added.

Geagea also lamented that “it seems that the main party in the Ain al-Remmaneh incidents considers itself to be above the law” and that “so far, the military judiciary is agreeing with it in this belief.”

The LF leader had overnight stressed that he will not appear before the Military Court if Hizbullah chief Sayyed Hassan Nasrallah is not also summoned. “The days of the Our Lady of Salvation Church are over and we will never allow a return to those days,” he emphasized.

Seven people were killed on October 14 -- mostly Hizbullah and Amal Movement members -- during a protest organized by the two groups to demand Tarek Bitar, the judge investigating Beirut's devastating port blast, be removed.

Hizbullah and Amal accused the Lebanese Forces, which supports the probe, of being responsible for sniper fire against the protesters that ignited street clashes. The LF denies the charges.

Fadi Akiki, a representative of the military court, has "instructed the army intelligence to summon Geagea and take his statement based on information provided by arrested LF members," a judicial official said.

Twenty-six people were arrested after the violence in the Tayyouneh-Ain al-Remmaneh area, most of them LF members, the official added on Thursday.

The exact circumstances of the violence remain unclear.

Geagea has denied responsibility for the deaths, saying that residents of Ain al-Remmaneh had "defended" themselves against "Hizbullah militiamen who tried to enter their homes."

Twenty-six people were arrested after the violence in the Tayyouneh-Ain al-Remmaneh area, most of them LF members, the official added on Thursday.

But the hundreds of shia thugs carrying weapons and RPGs are still roaming free. Every institution in Lebanon including the army is controlled by Hezbollah.

We’re still waiting for the army to catch the killers of Hariri, Tueni, Kassir and many more. We’re still waiting for the military court to launch an investigation and trial for the wat waged by Nasrallah and his men that claimed the lives of 1100 Lebanese and cost 11 billion dollars in reconstruction and cost actually much more in investments that were never made afterwards when people realized the country was unstable because of the illegal terror weapons.

Where’s the military court when we need it?

Free Lebanese missed a golden opportunity in Aug 2021 not to call for a million person peaceful march in support of Neutrality and No Arms Outside Army consistent with Batrak's hopes. This must be openly funded by the diaspora, including many of us, as we still believe Kelon Yanee Kelon. Enough egotism and stupidity by the thawra that has increasingly been infiltrated by the basij. Now we have a new chance for a million plus peaceful march in November. Would the social media of concerned citizens for once do the right converging work of assembling us on these two simple principles to save our country and loved one and the future of our kids from HizbIran criminals?

Who gave the order to enter the small streets of Ain Romaneh in reverse to what was agreed to with the army the day before.
Who gave the order to destroy cars, and ruin public properties to trigger an equal and opposite reaction?
Who killed lukman Selim?
Has fadi baltagi called on Wafiq Safa to listen to his testimony regarding the threat to judge bitar?

Yes indeed, no one is above the law, including Hassan Nasrallah himself. As Hezbollah were a party to this violence, they should also be questioned.

The title of the article is misleading.

Fadi Akiki, isn't he the husband of Nabih Berri's niece?