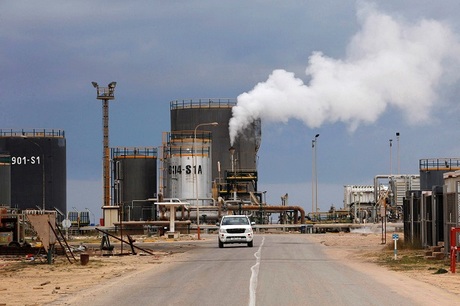 Libya's only operational oil refinery was "severely" damaged after gunmen battled for three hours around the complex, the National Oil Corporation said.

"Those involved held no regard for the lives of workers at the site."

Eight oil storage tanks and five other tanks for oil and chemical products were damaged and were leaking while the electrical transformer of the power supply system was also knocked out, it said.

Libya's vast oil sector, the backbone of its economy, has suffered regular halts in production over the decade since a NATO-backed revolt toppled dictator Moammar Gadhafi and sparked the country's violent disintegration.

"The infrastructure of the oil sector represents the lifeblood of the Libyan state," NOC chief Mustafa Sanalla said.

"Vandalizing these facilities, destroying them, or exposing their workers to danger, is a crime that cannot be tolerated."

Images posted on social media showed gunmen exchanging heavy fire around the refinery, but neither the identity of the groups nor the cause of the clashes is known.

NOC did not give details about the combatants.

Libya was gripped by violence and political turmoil in the aftermath of the 2001 uprising against Gadhafi.

In recent years, the country has been split between two rival administrations backed by foreign powers and myriad militias.

The "oil crescent" lies in one of the most hotly fought over areas, halfway between Tripoli and Benghazi in the northeast, under the grip of forces of strongman Khalifa Haftar.

But following a ceasefire between eastern and western forces last year, NOC reopened all the country's oil installations and production bounced back.

Today it produces about 1.2 million barrels per day, ten times more than in late 2020, but still short of the country's pre-revolution output of 1.5-16 million barrels.