Analysis: Why Saudi Arabia is Upset, Lashing Out at Lebanon 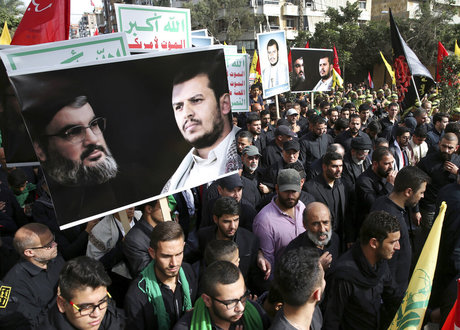 A televised remark by a game show host turned Cabinet minister in Lebanon about the war in Yemen has taken the country's crisis with Saudi Arabia to new depths.

Punitive measures from Saudi Arabia, once an important ally that poured millions of dollars into Lebanon, could cause more economic pain. The kingdom has banned all Lebanese imports, a major blow to a country whose main trading partners are in the Arab Gulf.

It is the latest escalation in the rivalry that has long played out in Lebanon between Saudi Arabia and Iran. Tensions have dragged on for years over the dominant role in Lebanon of Iran-backed Hizbullah.

Now Saudi officials insist it is pointless to deal with the government in Beirut after so much drift toward Iran.

But what is really behind Saudi's angry response, and what does it mean for the already embattled Lebanon?

The immediate spark were comments by Kordahi, who had gained popularity in the Arab world for hosting "Who Wants to Be a Millionaire" on a Saudi-owned TV network.

During a mock parliament streamed online last week, Kordahi fielded questions from an audience of young people from the region. In one answer, he called the war in Yemen "absurd" and said the Iran-backed Houthi rebels have attacked no one and have the right to defend themselves.

The online program was recorded about a month before Kordahi was named information minister in the government of Prime Minister Najib Miqati, formed in September. Kordahi was named by the Hizbullah-allied Marada Movement.

Saudi officials blasted his remarks as "offensive" and biased toward the Houthis. Since 2015, a Saudi-led coalition has been fighting the Houthis, who a year earlier took control of the capital, Sanaa, and northern parts of Yemen.

Most commentators have said they believe Kordahi's comments were a pretext for the Saudis to vent their frustration at Iran's influence in Lebanon.

The Saudis know what they don't want -- growing Iranian influence in Lebanon -- but they don't know what to do about it, said Joseph Bahout, research director at the American University of Beirut.

Saudi Arabia has long been a close ally of politicians in Lebanon's Sunni Muslim community, which chooses the prime minister under the country's sectarian system. But the kingdom never forged the divided community into a strong political proxy the way the Shiite Hezbollah -- with its powerful armed force -- became Iran's stalwart ally in Lebanon.

Particularly since the 2005 assassination of its most powerful ally, former Prime Minister Rafik Hariri, the kingdom lost its tools of influence.

Under Crown Prince Mohammed bin Salman -- known for his assertive, some say brash, foreign policy -- Saudi Arabia took sporadic action trying to impose its will but failed to develop a cohesive strategy or find new well-rooted allies. It could only watch as Hizbullah and its allies came to dominate most recent Lebanese governments.

Saudi Arabia's most drastic move came in 2017, when it reportedly forced then-Prime Minister Saad Hariri to announce his resignation, citing Hizbullah's domination, in a televised statement from a brief visit to the kingdom, where he was apparently held against his will.

The incident backfired. Hariri returned home and revoked his resignation, supported by Hizbullah and its allies. He lost Saudi backing.

Relations have been chilly since. Last spring, Saudi authorities banned imports of all Lebanese produce over allegations they were used for drug smuggling.

Most recently, Riyadh refused to back Miqati as prime minister because of his coalition with Hizbullah. The Saudis found themselves alone when Washington and Paris expressed support for Miqati, after Lebanon had been without a government for over a year.

Frustrated, the Saudis appear to have gone for a strong move over Kordahi's comments. Saudi Arabia, as well as the United Arab Emirates, Kuwait and Bahrain, withdrew their ambassadors from Lebanon and expelled Lebanese envoys to the kingdom.

The Saudi measures are a huge blow to Miqati's new government.

The import ban means the loss of millions of dollars in desperately needed foreign currency. Any further escalation could undermine jobs of more than 350,000 Lebanese in Gulf Arab states who send home millions in remittances.

Miqati and other officials have appealed to Kordahi to resign from the Cabinet, but it's uncertain that would resolve the rift.

Hizbullah has stood firmly behind the minister, saying his resignation won't resolve what they called "extortion" to force Lebanon to change its foreign policy.

It all portends more internal divisions in a government already paralyzed over the investigation into last year's massive Beirut port explosion that killed more than 200 people. Hizbullah has demanded the chief investigating judge's removal. A recent burst of street violence, the worst in years, raised the specter of social tensions ahead of crucial parliamentary elections in March that are expected to be a test for Hizbulah and its allies.

In a WhatsApp message to his Cabinet read on local TV stations, Miqati said the country is "at the edge of a precipice."

He flew to Glasgow to seek French and U.S. mediation but his options are limited.

"It is kind of a completely blocked and stalemated situation," he added.

AP has fallen asleep.
As the New Yorker used to say, this is where I stopped reading: - WHAT DO THE SAUDIS WANT? -

The Saudis know what they don't want -- growing Iranian influence in Lebanon -- but they don't know what to do about it, said Joseph Bahout, research director at the American University of Beirut.
AP has not heard of the wave of democratization sweeping the world since 1776.

Time to remove the 50% set-aside of legislature seats for Christians in Article 24 of the Constitution. That "burst of street fighting" last month (Christian snipers on rooftops) and Geagea's boasting about it set the stage.