KSA, France Say Arms Must be Exclusively in Hands of Lebanese State 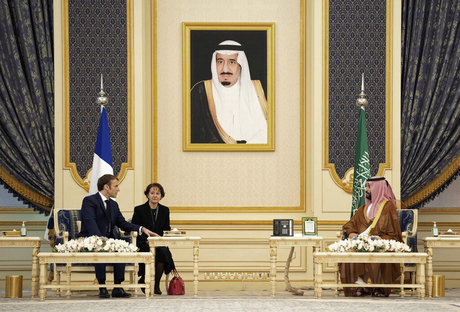 It also needs to “abide by the Taef Accord, which is entrusted with national unity and civil peace in Lebanon,” the statement said.

The statement also called for “limiting the possession of arms to the legitimate institutions of the Lebanese state,” while emphasizing that “Lebanon should not be a launchpad for any acts of terror that would undermine the region’s security and stability, nor a source for the trade of drugs.”

You idiot Macron why don't you go and tell that to the Mullahs in Iran. They are the ones who control the weapons that the Hizboz have. It's theirs after all. You won't dare do anything to them cause you're protecting French business interest and running for reelection. So spare us please. When you cane to Beirut they laughed at you. Told you yes we'll agree to your initiative. As soon as you left they were laughing behind your back.

Anyone who thinks the Hizbos will just lay their weapons on their own is delusional.

Removing HizbIran arms must be the first step of any accord. Simply achieved by a government statement that no arms allowed outside army. Then provide a period of 90 days for all militias including HizbIran to hand all arms exceeding a personal non-automatic arm to the army, and finally empower the army and Unifil to insure this resolution is implemented and searching all Basij arm depots. Simple if all start by a million-plus PEACEFUL Cedar Revolution II march focused on Neutrality and No Arms Outside Army. This unified cry is what the international community is waiting for to actively save Lebanon and end Basij occupation. Let us do it for our Kids, for a free and democratic Lebanon we can all be proud of.

The chances Hizballah agreeing to disarm is somewhere between Zero and Nil.

Under the right circumstances empowered by Cedar Revolution II million-plus peaceful march against Hizbollah's Iranian arms, Lebanese silent majority of Shiaa, representing Mousa Saddr' Shiaa, will be the first Lebanese to insure HizbIran arms are removed from their villages and towns and liberated from the Basij tyranny. Believing otherwise will be an insult to the Shiaa Community. Does any doubt that if Moussa Saddr was alive in 2010 he would be a prime supporter of the Green Revolution in Iran that was brutally suppressed by the Basij.