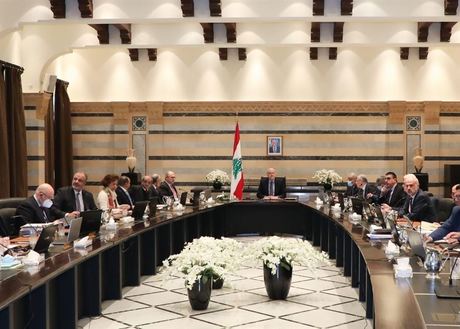 A first Cabinet session for discussing the draft state budget was held Tuesday at the Grand Serail under the chairmanship of Prime Minister Najib Miqati, as two ministers voiced reservations over the way the budget was being addressed.

“The discussions have reached Article 39 of the draft state budget and we will continue the deliberations from Article 40 after a 30-minute break,” acting information minister Abbas al-Halabi said after the session.

“The budget is being debated article by article and Cabinet discussed several articles related to economic incentives as it suspended the debate over other articles,” Halabi added.

Energy Minister Walid Fayyad meanwhile announced that he is not satisfied by “the way the budget is being addressed in the session,” noting that he prefers to “tackle the objectives and the comprehensive plan before delving into the budget in detail.”

Tourism Minister Walid Nassar for his part said that he shares Fayyad’s reservations.

He also said that “the articles whose discussion was suspended are related to income tax,” noting that “the atmosphere is positive” and that “the exchange rate has not been agreed until the moment.”