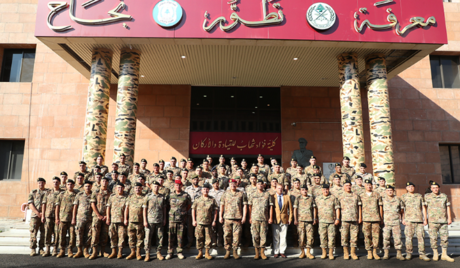 The Lebanese Army “stands behind the political authority in any decision it may take in the sea border demarcation file” and is not concerned with any other comments or analyses, Army Commander General Joseph Aoun said on Monday.

“We do not interfere in political affairs at all,” Gen. Aoun said, during a visit to the Fouad Shehab Command and Staff College.

“The army has openly announced its stance following the end of its technical mission, and it stands behind the political authority in any decision it may take in the sea border demarcation file,” he added.

“We’re not concerned with any comments, analyses or stances, be them political or journalistic, and the official stance exclusively comes from the Army Command,” Aoun went on to say.

“Any other opinion does not reflect the army’s stance,” he emphasized.

“The surge in the escalation by the Presidency, the FPM and Deputy Speaker Elias Bou Saab against the head and members of the technical military team that had been in charge of indirect negotiations in Naqoura, on the eve of the U.S. mediator’s visit, is not separate from the attempt to turn the Americans against the Army Command, by describing it as the intransigent party that is clinging to the coordinates of Line 29, while considering Bassil as the party capable of securing the success of the sea border demarcation talks with Israel under the requirements of the U.S. mediation,” the sources added.

The sources also said that “hitting out against the army commander will likely be one of the dishes of the dinner banquet that Bou Saab will throw in Hochstein’s honor in order to pave his way to the Baabda Palace on Tuesday morning.”