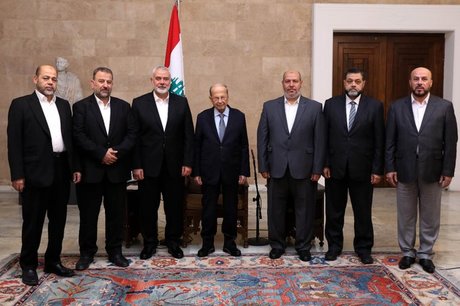 President Michel Aoun stressed Friday the Palestinians' right to return to their homeland and build their independent state, as he met Hamas leader Ismail Haniyeh in Baabda.

Haniyeh said, after the meeting, that he refuses the naturalization of Palestinian refugees in Lebanon and the idea of an alternative homeland.

"I have told President Aoun that we refuse displacement," Haniyeh added, stressing on "the right to return to Palestine."

"The Israeli occupation does not differentiate between a Muslim and a Christian in Palestine, especially in Jerusalem," Haniyeh told Aoun.

He also expressed his solidarity with Lebanon as he condemned Israel's attempt "to steal from Lebanon's maritime resources," pointing to a gas production vessel that Israel had moved into an offshore field partly claimed by Beirut, earlier this month.

He added that he hopes for "security, stability and more unity" in Lebanon.

Haniyeh had arrived in Beirut on Tuesday, for meetings aimed at "strengthening cooperation and fraternity between the Palestinian and the Lebanese people", a Hamas statement said.

Haniyeh had arrived in Beirut on Tuesday, for meetings aimed at "strengthening cooperation and fraternity between the Palestinian and the Lebanese people", a Hamas statement said.

Yes, after his visit I started to feel the fraternity with the Palestinians.

Does anyone else think Aoun looks like he was just beat up by a group of overweight thugs and then made to stand for a picture sowing e really is OK afterall?

"Resistence" is a lie.

Look, they show they have no respect for Lebanon and its Presidency by not wearing a tie.