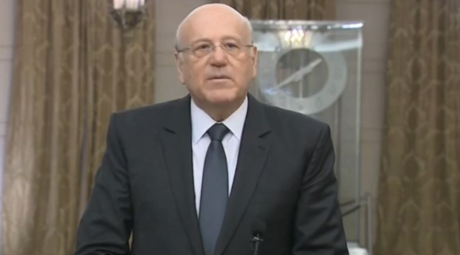 Prime Minister-designate Najib Mikati on Tuesday hoped that the “national interest” will “triumph over everything,” following the two-day, non-binding consultations that he held with MPs over the shape and program of the government that he intends to form.

“I listened to the MPs and explored their opinions and we’ll take a large part of what they said into consideration,” Mikati said at a brief press conference that followed the consultations.

“We all know the current situation in the country and we know that the advices and viewpoints that were given during the discussions are aimed at serving the national interest, even though they came from various perspectives,” Mikati added.

“In the end, the national interest will triumph over everything, and God willing, we will form a government that can perform its duties and continue what our previous government had started, especially with the International Monetary Fund and regarding the electricity plan and the sea border demarcation file,” the PM-designate went on to say.

“God willing, things will see the light in a proper way,” he added.

Asked about the date on which he will meet with President Michel Aoun at the Baabda Palace, Mikati said the visit will happen at the “appropriate time.”