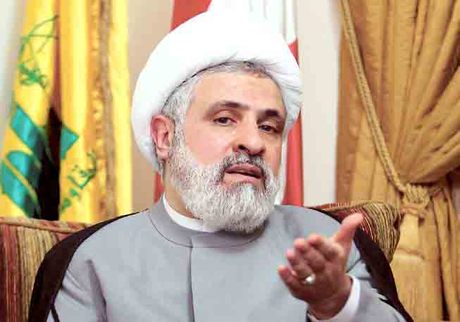 Hezbollah deputy chief Sheikh Naim Qassem on Thursday stressed that the formation of a new government is “something essential and fundamental,” urging the parties to offer compromises.

“The government’s formation is considered something essential and fundamental, because without a government nothing can change in this situation and things might deteriorate further,” Qassem said.

“Hezbollah wants the government to be formed and it advises that we make as much compromises as possible, because any government formed would be better than no government, and because some of the achievements that it might make in this period might be a prelude to exiting the crisis,” Qassem went on to say.

Every long-term project planned while HizbIran control Lebanon will be costing Lebanese and their children over 10 times its actual cost. Simple risk management calculations.
A peaceful well governed nation can get loans at 2% yearly interest. Political instability increases interest to 6%-10% for same loan. In a country controlled by a criminal militia funded by a belligerent country, interest will exceed 15%. Today no bank will loan Lebanon not even at 20% interest.
A loan payable in 30 years costs:
80% more if interest=2%
474% more if interest=6%
1645% more if interest=10%
6521% more if interest=15%
That is why all long-term investments dried up in Lebanon, our economy collapsed, businesses and country went bankrupt, and banking system destroyed. Thanks for Useful Idiots Michel & Ghada Aoun for taking us to hell while protecting Hizb criminal activity, risk to economy, and disabling interest rates.

Lebanon had one of the highest growth rates after Cedar Revolution (6 to 8% annual growth of GNP). If sustained, it would have completely paid our debt and set Lebanon to be the new Singapore and regional business and financial headquarter of the region. All changes with Hizb 2006 War and other Hizb actions mentioned above. We had zero to negative growth since then costing the economy hundreds of billions of dollars. Not to mention Hizb making Lebanon a pariah state isolated on the world scene and subject to skyhigh interest. The cost of all political corruption combined pale in comparison to Hizb cost to our economy. Unless this problem is fixed, we'll keep digging deeper in Hell. Anyone accepting HizbIran occupation and not calling for Hizb disarmament is a traitor!

“seeking to block any achievement during this period, pending the end of the current presidential term.”

I am confused---what 'achievements' do they think will happen in the last 4 months of the old man's term? No electricity, no economy, no infrastructure, and not even a chance to get a passport because the situation is so bad that people want to leave.

Maybe he should clarify his whatever the hell he is trying to say, because NOTHING will rescue the old man's legacy as being one of the worst leaders IN THE HISTORY OF THE WORLD. He can think the iranian mercenaries and his sil for a lot of this.

A basic principle of risk management and loss analysis used in economic analysis, insurance evaluation or accident reparation analysis is not only to quantify the direct loss, but also the indirect loss and loss from future potential earnings. Now let us go back to 2005 after liberation from Syrian occupation, the Country's potential from education, local and diaspora capability, available capital and business expertise, stability of money and positive growth outlook, and so on; and evaluate using basic economic principles where Lebanon would be today if Hizbollah was disarmed by Lebanese army in 2006. The difference between our potential and the hell we're in is in the hundreds of billions as can be calculate by expert firm and that's HizbIran true cost. If pain and suffering were to be added, we're talking of trillions. Time will come where miriad of lawyers will be busy in international courts suing Iran for its militia's criminal and destructive acts.