Aoun: Border demarcation will be finalized soon and will satisfy everyone 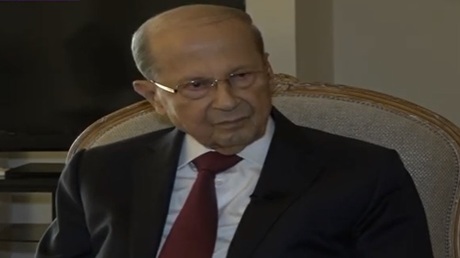 President Michel Aoun has reassured that the sea border negotiations between Lebanon and Israel “will be finalized soon” and that “the solution will satisfy everyone.”

“Border demarcation is making progress and we will soon finalize it,” Aoun said in an interview on OTV.

“I believe finalizing it will not take a long time,” he added.

Asked whether the solution will be in Lebanon’s interest, Aoun said “certainly.”

“It will definitely be in everyone’s interest. We are demarcating a border and the two parties must be satisfied with the solution when we reach it, or else it wouldn’t be a solution, but rather hegemony by one party over the other,” the President added.

Asked whether the Greek ship is “operating” in the Karish field, the President said it had been operating but that he does not know whether it continued operating after Hezbollah sent the three drones on Saturday.

“We will reach a solution in a short period and I believe that we have almost reached an understanding with the Americans, who are mediating between us and Israel,” Aoun said.

“I don’t know when exactly, but the process will be successful. We will reach a solution that satisfies everyone,” the President reassured.

Responding to a question, Aoun said “if the atmosphere wasn’t positive, we would not have continued with the negotiations.”

I hope no marine border demarcation before ending Hizbollah Basij occupation and saying goodbye to worst president in human history. We know how Iran's Basij have used its natural resources to build rockets and tool of oppression, and spread its kiss of death to Shia throughout the region. We know how Aoun presidency was mired in corruption and nepotism, bankrupted Lebanon, raped our independence and dignity, made us a beggar and destitute nation, isolated us from our surrounding and stole the future of our kids. Please no border deal before we get rid of them!

There is no possibility whatsoever of reaching an agreement which "will satisfy everyone".
Nothing other than the disappearance of Israel would satisfy Hizballah, so even if all the other participants agreed they would veto it.