Report: Hajj carried funds that ended up in collaborators' hands 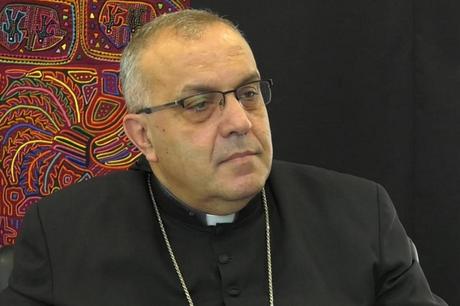 Archbishop Moussa al-Hajj had carried funds from Lebanese exiles in Israel that ended up in the hands of collaborator with Israel in Lebanon, a media report said on Friday.

“It seems that the military judiciary is pressing on with its decision to resume investigations over the recipients of the funds sent with the archbishop, especially that he was carrying a file containing names of convicted collaborators,” al-Akhbar newspaper reported.

“Security agencies have started investigations and search for those individuals, in order to answer a host of questions about the nature of the relation between the senders and the recipients and the possibility of the presence of security ties between them,” the daily added.

Al-Akhbar also published excerpts from leaked investigation papers containing the May 5, 2022 testimony of Lebanese Army Corporal First Class Youssef al-Fakhoury, who was “arrested and charged based on Article 278 of the penal code after his communication with Lebanese collaborators residing in the occupied Palestinian territories was confirmed.”

“Fakhoury confessed that he had received two sums of money: the first was sent to him through the OMT service by M. Richa and the second delivered to him by hand by M. Richa. Following Richa’s interrogation, she confessed that her brother Elias Richa, a collaborator who fled to occupied Palestine in the year 2000, had send her the sum of money with Archbishop Moussa al-Hajj,” the daily added.

Hajj has meanwhile told interrogators this week that in the wake of the catastrophic Beirut port blast in August 2020, Lebanon’s bishops “agreed that the Haifa diocese and the Patriarchal Vicariate in Jerusalem would collect cash donations from believers residing in the occupied territories before handing them to him to carry them to Lebanon and hand them to the Western and Eastern churches.”

He added that “a part of the funds was being handed over to the Caritas association with the purpose of distributing them to the poor and the needy.”

Asked whether he knows Layla Matar, the archbishop “testified that he met her in occupied Palestine during the funeral of her husband Jean Bou Rached,” denying any knowledge of Richa and Fakhoury.

According to al-Akhbar, Matar is suspected of working for Israeli intelligence agency Mossad and is the widow of Jean Bou Rached, one of the collaborators who had fled to Israel in the year 2000. The daily added that Matar had asked Fakhoury to take pictures of Hezbollah posts in Lebanon.

al-Akhbar newspaper: a mouthpiece of hezbollah.

Hey Sinatra, that mafia name really suits you! I tend to agree with the patriarch: Al-Rahi: What Archbishop Moussa al-Hajj did was a humanitarian act and they have said that we're collaborators, but we refuse to have "a heart made of stone."