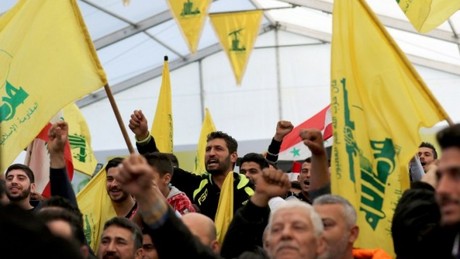 Hezbollah on Friday offered warm condolences to the Palestinian Islamic Jihad group after Israeli strikes on Gaza killed senior commander Taysir al-Jabari and 14 other people, in what Israel has described as a major military campaign against the group.

Lauding “the solidarity of all Palestinian resistance factions,” Hezbollah said in a statement that it “will always stand firmly by the aggrieved Palestinian people and their brave resistance.”

It also said that it “openly supports all the steps taken by the leadership of the Islamic Jihad movement in responding against the aggression and its insolent crimes.”

The Palestinians are legitimately resisting ethnically European invaders and occupiers… unlike Hezbollah being an Iranian hegemonic occupation tool.

God bless our Shia resistance aka Hezbollah for voicing support for the Palestinian people and offering very warm "condolences" the the Palestinian Islamic Jihad group. Commander Taysir al-Jabari was a legend and his military expertise is respected throughout the globe.

By offering its warm words of support, our Shia resistance has proven yet again its full commitment to the liberation of Jerusalem and the whole of occupied Palestine. These warm words have echoed throughout the decision making centers of the world, and planted fear in the hearts and souls of the Zionist state; the impact of which will surely unfold in the coming few days.

If only the Lebanese would fight the Iranians like the Palestinians fight the Israelis.

Iranians my dear, use Hezbollah as a tool. They occupy us by proxy. They use Lebanese as a base camp to pressurise their enemy.
Iranians call Lebanon their Base. They use their armed proxy to assassinate, embezzle, intimidate, and wage wars against our will. Iran through their proxy have established a state within a state with its own police, secret services, economy, banks, territories where the Lebanese state has no sovereignty. So yes. Iranians have destroyed villages, they have created an exodus ouf brains and companies, they have taken hostage a population of over 4.5 Million, and they are sectarian. Wake up!