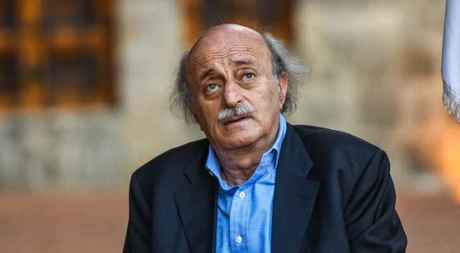 Jumblat also criticized Lebanese Forces leader Samir Geagea and considered that Geagea has made it possible for Aoun to become President.

He said the latter easily accuses others of treason. "I do not dare to name a President, I am afraid I would be dubbed as a traitor," Jumblat stated, after Geagea had said days ago in a press conference that the parties that will prevent the opposition from electing a new sovereign president, would be traitors.

He said that the opposition forces are still fragmented while Hezbollah and its allies can easily choose the President they want in the coming presidential poll.

Jumblat considered that the priority now is for the reforms in the energy and banking sectors over the political issues like Hezbollah's disarmament and the border demarcation, and that Lebanon cannot be neutral "as long as a beast called Israel exists."

Jumblat had met last week with a Hezbollah delegation in Clemenceau.

Just when Walid's comments, word choice, and emphasis sound like he is about to make the Big Leap forward, he runs back to grovelling and bolstering support for Hezbollah's self-appointed purpose as reason for keeping it vital. AAHh well ... 7 more years of poor crops and famine ...

What this criminal is telling us is: Hezbollah will appoint the nest president and that reform is possible with the presence of a sectarian armed militia controlling every aspect of governance!

Aristocracy was abolished in Lebanon when it became a republic, jumblatt hasn’t realized this yet. He still has a fiefdom and serfs… rise up people, storm the castle and hang him!

He’s always been THE master manipulator, anything to cling to his serf…

My proposal for electing a President:

Round 1: Anyone eligible can run. Since we're a sectarian country, then in this round only Christisans can vote. The top 2 vote getters, will move to Round 2.

Round 2: Top 2 vote getters from Round 1 go into the general election where ALL citizens registered and eligible to vote will cast ballots. The one that get 50% +, is elected President.