Aoun: I'll leave the palace only if it's a normal day 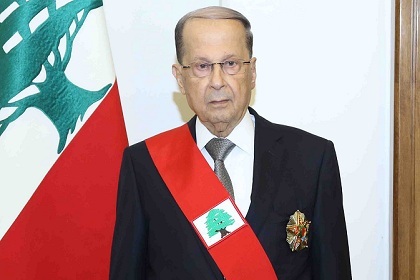 President Michel Aoun has again hinted that he might not leave the presidential palace on October 31 should no new government be formed and should no new president be elected.

“The caretaker government cannot assume the president’s powers. This does not only violate the constitution, but also subjects us to a real national crisis that can turn flammable,” Aoun said, in an interview with al-Akhbar newspaper published Tuesday.

“I hold onto my point of view and I insist on the presence of a government enjoying the fill constitutional characteristics. I also encourage the PM-designate to agree on it so that it can shoulder the burden of what’s waiting for it,” the president added.

He accordingly warned that “the continuation of the government in its current capacity would mean that we are before a conspiracy.”

“I’m afraid that some might be preparing for the last day of my term… a conspiracy that resembles a coup against the system, state, presidency and constitution,” Aoun added.

“I’m also afraid that the objective might be to change the system,” he cautioned.

Asked about his reaction in the event of such a scenario, Aoun said: “I won’t say what I would do. My known decision is to leave the presidency at the end of the tenure, but beware. The threads of the conspiracy have started from now… and I also have concerns over security.”

“I have repeatedly said that I will leave the Baabda Palace on the last day. I add now that I will only leave the palace if it is a normal day on which no one has evil intentions. If I sense the presence of a conspiracy, I will not stand idly by,” the president warned.

He's 88 years old and can barely walk. He'll be leaving Baabda Palace soon enough regardless of his intentions.

He’s much older than that, his bio was modified many years ago to make him suitable for the presidency. He’s either 90 or 91.

May he leave in a coffin

If there ever were a more destructive mummy. Worst president in human history that not only sold a country to the basij forsaking freedom and sovereignty, but also managed to bankrupt a whole population, devalue all public assets, make a proud nation a beggar nation, and insure no hopes for future generations pre-selling future natural resources. He should rot in jail!