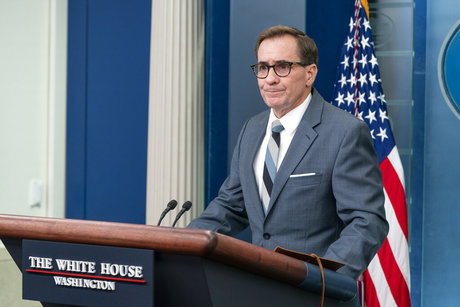 "It's irresponsible rhetoric for a nuclear power to talk that way. But it's not atypical for how he's been talking the last seven months and we take it very seriously," John Kirby, spokesman for the White House's National Security Council, told ABC's "Good Morning America" after Putin said he would use "all available means" to protect Russian territory.

"We're monitoring as best we can -- their strategic posture. So if we have to, we can alter ours. We've seen no indication that that's required right now."

Kirby reiterated previous comments by President Joe Biden when asked what the U.S. response would be to Russia reaching for its nuclear arsenal, which analysts speculate could mean detonating a demonstration blast over the Black Sea, using battlefield nuclear warheads to limit the radiation, or ultimately using a larger weapon.

Kirby described Putin's order to mobilize an expected 300,000 reservists from around Russia as a sign of weakness.

"It's definitely a sign that he is struggling," Kirby said. "He has suffered tens of thousands of casualties. He has terrible morale, unit cohesion on the battlefield. Command and control has still not been solved. He's got desertion problems and he's forcing the wounded back into the fight -- so clearly manpower is a problem."

Kirby said "sham" referendums on joining Russia that are being prepared in Russian-invaded areas of Ukraine would not change U.S. policy.

"That is Ukrainian territory. It doesn't matter what sham referendum they put in place," Kirby said. "We're going to continue to support Ukraine with security assistance and other financial aid, as the president said, for as long as it takes."

AFP regrets to announce that it is wrong about "veiled threat", since the Russian announcement was that the use of nuclear weapons against it would be met with nuclear counterattack. If AFP had a conscience, it would regret to announce, etc., that is.