Israeli raid in the West Bank sparks clashes, killing one 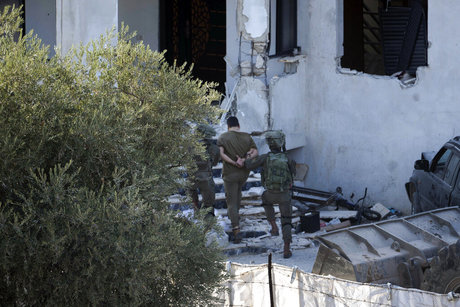 A Palestinian man was killed by Israeli army fire Wednesday, as troops raided a village in the occupied West Bank, the Palestinian Health Ministry said.

The ministry said Alaa Zaghal, 21, died from a gunshot wound to the head in Deir al-Hatab, east of Nablus.

The army said it would comment on the incident after the Yom Kippur holiday.

The WAFA news agency said Omran surrendered after an Israeli bulldozer approached his home. It was unclear why he was wanted by Israeli forces.

The Palestinian Red Crescent said seven people were wounded, including three journalists, during the clashes and that one of its ambulances had been hit by tear gas.

Israel has carried out similar incursions almost every night in the West Bank since spring after a spate of Palestinian attacks against Israelis killed 19 people.

The Israeli raids have killed some 100 Palestinians, making this year the deadliest since 2015. Most of those killed are said by Israel to have been militants, but local youths protesting the incursions as well as some civilians have also been killed in the violence. Hundreds have been rounded up, with many placed in so-called administrative detention, which allows Israel to hold them without trial or charge.

The raids have increased tensions in the West Bank, with a recent uptick in Palestinian shooting attacks against Israelis. They have also drawn into focus the growing disillusionment amongst young Palestinians over the tight security coordination between Israeli and the internationally backed Palestinian Authority, who work together to apprehend militants.

Israel captured the West Bank in the 1967 Mideast war and 500,000 Jewish settlers now live in some 130 settlements and other outposts among nearly 3 million Palestinians. The Palestinians want that territory, along with east Jerusalem and the Gaza Strip, for their future state.