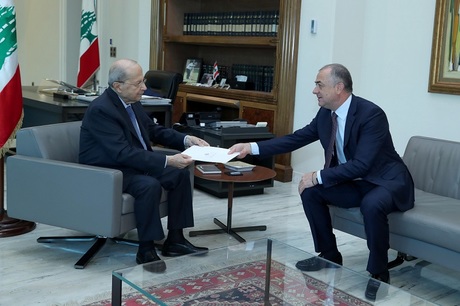 Lebanon has secured its "full rights" in the latest text drafted by U.S. mediators to demarcate the maritime border with Israel, its lead negotiator said Tuesday, after Israel said it met its terms too.

"Lebanon has obtained its full rights, and all of its remarks have been taken into account," said lead negotiator Elias Bou Saab, the deputy speaker of parliament, after handing the draft to President Michel Aoun.

"Today we have come to a solution that satisfies both parties."

Lebanon's presidency said the proposed final text submitted by Hochstein was "satisfactory to Lebanon" and voiced hope that "the agreement on the demarcation will be announced as soon as possible."

Israel had said earlier Tuesday that it was close to a "historic" deal with Lebanon and the U.S. draft met its "demands".

The welcome for the text on both sides of the border has raised hopes that years of negotiations have finally borne fruit, allowing cash-strapped Lebanon to develop potentially lucrative offshore gas reserves.

Bou Saab said he hoped an agreement could be signed before Aoun's term of office ends on October 31.

He added that Lebanon will "get its full rights from the Qana field", and Israel might receive compensation through TotalEnergies. There will be no direct partnership in gas exploration or exploitation between the two enemy states, he said.

Aoun’s office in a statement said the latest version of the proposal “satisfies Lebanon, meets its demands, and preserves its rights to its natural resources," and will hold consultations with officials before making an announcement.

Negotiations between Lebanon and Israel, which are still technically at war, had suffered repeated setbacks since their launch in 2020 but gained momentum in recent weeks with both sides eying revenue from potentially rich Mediterranean gas fields.

U.S. envoy Amos Hochstein floated a proposed final agreement earlier this month that was accepted by Israel, but Lebanon sought some adjustments.

Israel said last week it intended to reject the changes sought by Lebanon, even if that made a deal impossible, but negotiations continued, culminating in what both sides described as acceptable final terms.

"Israel and Lebanon have reached an historic agreement settling the maritime dispute," said a statement from Israel Prime Minister Yair Lapid's office, in which he hailed "an historic achievement that will strengthen Israel's security."

A major source of friction at the talks was the Karish gas field, which Israel insisted fell entirely within its waters and was not a subject of negotiation.

Lebanon reportedly claimed part of the field and Hezbollah, which holds huge sway in Lebanon, threatened attacks if Israel began production at Karish.

Israel has said production would begin at Karish as soon as possible, regardless of Lebanon's demands.