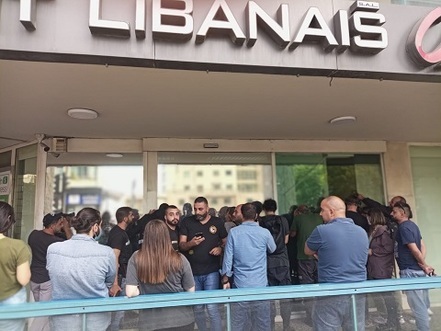 Joint parliamentary committees convened Tuesday in Parliament to resume the discussion of a capital control draft law, including one of its most important clauses.

A clause about forming a special committee to supervise the implementation of the law is to be discussed today or tomorrow, as the discussion will resume during a second session on Wednesday.

The committees had convened in the last weeks, finalizing 17 clauses, amid protests by depositors and some MPs.

Depositors and activists rallied again near Parliament to protest the law.

The adoption of a capital control law is one of the reforms requested by the International Monetary Fund to financially help crisis-hit Lebanon, but some consider it unfair to the depositors, who consider the law as "a veiled amnesty law" for "the thieves of public and private money."

Since October 2019, banks have been imposing informal capital controls, barring depositors from reaching into their dollar accounts, as well as stopping transfers, amid a severe financial crisis.

The capital control law will impose official restrictions on transfers and withdrawals.

MPs from different political parties have long said they will defend the depositors' rights.

"Our aim is to protect the depositors' savings and to stop the overseas transfers," Hezbollah MP Ali Fayyad said after the session.

For his part, Deputy Prime Minister Saadeh Shami who attended the session said that the financial recovery plan is a different topic, as some MPs had mentioned it during the session. "There is some sort of populism," Saade added.

In its last session prior to becoming a caretaker Cabinet following May 22 parliamentary elections, the government had approved an economic recovery plan amid the objection of the ministers of Hezbollah and Amal.

The recovery plan said that banks would be recapitalized from bank shareholders and large depositors.

It said it would protect small depositors "to the maximum extent possible" but did not specify the minimum amount that will be protected.