Macron tells Biden 'most work was yours' in Lebanon's border deal 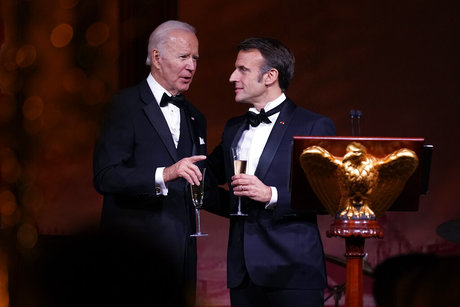 "Dear Joe, you elegantly thanked France for the role we played in the historical agreement between Israel and Lebanon," French President Emmanuel Macron said, referring to a recent deal to demarcate the sea border between the two countries.

"Let me be honest: I think most of the work was yours."

But U.S. Presiedent Joe Biden batted the same compliment back yet again.

"Well, thank you Emmanuel. I began to refer to you in private as my 'closer,' of that deal with Lebanon and Israel. We did negotiate, but we needed a closer to get the job done, and you did it."

The leaders, with aides, had met on Thursday for about three hours after taking part in a formal ceremony with hundreds of people gathered on the South Lawn on a sunny, chilly morning. There was a 21-gun salute and review of troops, and ushers distributed small French and American flags to the guests.

The state visit marked a return of a White House tradition of honoring close foreign allies that dates back to Ulysses S. Grant's presidency.