What will Hezbollah-Bassil meeting discuss? 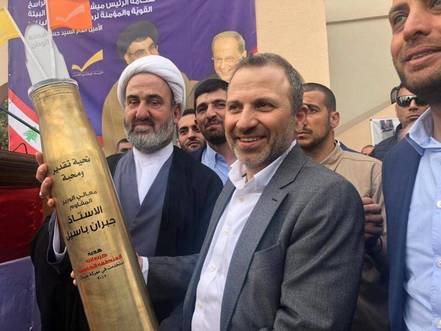 Hezbollah will try for a last time to convince Bassil with its presidential candidate al-Marada leader Suleiman Franjieh, al-Jadeed said, adding that Hezbollah had previously informed Progressive Socialist Party leader Walid Jumblat that Franjieh is the only candidate trusted by Hezbollah.

Al-Akhbar newspaper ruled out that possibility. It said Monday that prominent sources have told it that the main goal of the meeting is an attempt to repair the relation between Hezbollah and the FPM, to try to prevent that the understanding turns into rivalry.

The meeting will rather be a beginning for settling the disagreement, according to the sources who went on to say that Nasrallah's hand is extended and that the meeting will discuss all the contentious files, including the presidential and the governmental files.

The FPM for its part welcomed the meeting initiative, al-Akhbar said.

"We do not want disagreement. Our hand is extended and our heart is open," prominent FPM sources told the daily.

But the sources added that what happened cannot be fixed only with a meeting but needs to be addressed and resolved.

FPM are the biggest traitors to our christian community as well as to our beloved country lebanon, and history will condemn them harshly as they handed the country to Iran. The whole idea of them breaking the understanding with hezb was just so gebran bassil can become president instead of frangieh , what a coward!. Now hes running back to them as he will be politically isolated and needs their backing to steal what is left of the state institutions.

Aoun and Bassil sold Lebanon and our dignity to the Basij for 30 pieces of silver. Bassil Don Quixote was inflated by Hizb in order to get Christian cover for its arms and swallow Lebanon and its institutions piece by piece. Bassil current standing is comical as all the cards are in Hizb hands and Bassil's history and reputation as political prostitute will insure he'll always be the dog in the leach following his masters and doing its bid. The perfect disposable Useful Idiot. Lebanon after Cedar Revolution would have been the Singapore of the region if it wasn't for these traitors Aoun and Bassil. Frangieh belongs to the same Useful Idiots Club.

Nice te7mile, who is it for?