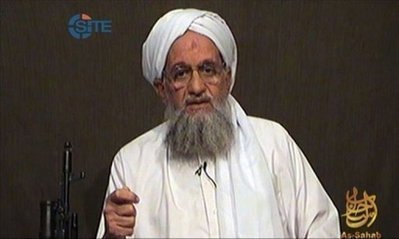 A Syrian opposition group on Monday rejected any interference by al-Qaida in the unrest-hit country after the extremist network's leader voiced support for their uprising in an Internet video.

In a video titled "Onwards, Lions of Syria", al-Qaida's Ayman al-Zawahiri criticized the Syrian regime for crimes against its citizens, and praised those rising up against the government, according to SITE Intelligence Group.

"We categorically reject these statements and any attempts by the al-Qaida network to interfere in our revolution," the opposition General Commission of the Syrian Revolution said on its Facebook page.

"We are a people struggling for freedom and dignity and for a democratic state," it added.

The General Commission, which was founded in August last year, aims to strengthen the opposition's political ranks and to bring down the regime of Syrian President Bashar al-Assad.

In the eight-minute video that appeared on jihadist Internet forums at the weekend, Zawahiri urged Syrians not to rely on Western or Arab governments, which he said would impose a new regime subservient to the West.

"Don't depend on the West or America, or the Arab governments and Turkey," he said, according to SITE. "(They) had deals, mutual understanding and sharing with this regime for decades.

"Depend on Allah alone and then on your sacrifices, resistance and steadfastness," he added, calling on Muslims to support the uprising and remove the current regime which he condemned as anti-Islam.

"I appeal to every Muslim and every free, honorable one in Turkey, Iraq, Jordan and Lebanon, to rise to help his brothers in Syria with all that he can," Zawahiri was quoted as saying.

A U.S. media report citing unnamed American officials said al-Qaida's Iraqi branch was likely to have carried out twin bomb attacks that killed 28 people in Aleppo on Friday, along with attacks in Damascus in December and January.

The bombings appeared to verify Assad's charges of al-Qaida involvement in the uprising against his 11-year rule, said the McClatchy Newspapers chain.

But the brotherhood and the Salafist groups like HIzb al tahrir who are the only ones armed and doing the actual fighting did not denounce Al- Qaida because Hizb al Tahrir always praises Al Qaida.

the filthy zionist media war terrorist hallucinate that our glorious resistance is similar to their mercenaries the so called al qaida.

jabalamel is the reason you live in the Dark Ages.