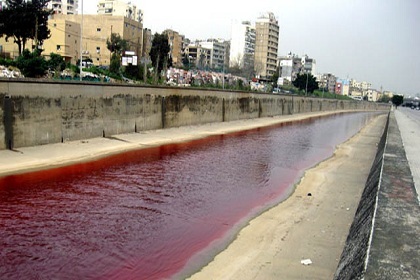 The environment ministry was on Thursday investigating the mysterious red color that tainted the Beirut River a day earlier, urging the Hazmiyeh and Baabda municipalities to cooperate with it.

Beirut police went in vain up and down the stream on Wednesday to locate the source of the red liquid.

As Safir daily said that the ministry’s team of experts headed by Bassam Sabbagh made an initial finding that the pollutant has no odor and that the red color could come from blood, a chemical, or a dye.

“The source of the pollution hasn’t been identified yet because it comes from a closed sewage,” Environment Minister Nazem al-Khoury said. “But it could probably be from the Hazmiyeh or Baabda municipalities.”

He urged the municipalities to cooperate as soon as possible to determine the source and type of pollution.

“There is a possibility that a factory threw pollutants or a slaughterhouse” threw the remains of animals, al-Khoury said.

An unlicensed farm could also be behind the pollution, he added.

Or it could be the end of the world!

maybe coming all the way from Syria.....

It's not a sectarian issue and doesn't bring and financial profit so no one cares...
Phony politicians!!! and Aphony Country
Mr Brain

take a sample and determine the components already!

It is just another way for us to learn how worthless our Ministries are. Give it two or Three days and they'll forget it ever happened. Or at best. They'll find the source and then get payed not to advertise it......and then it will be forgotten about... SHAME

I'm pretty sure it is caused by Mr. Aoun's hemorroids which were caused for the long active relationship with Mr. Assad. scientifically, too much friction cause hemorroids.

this is a big shame, when we are going to stop destroying our country, i don't think we deserve this Lebanon

cojonudo !!! asi me gusta.jajjajajaja
the best i have ever heard.Actually it can t be aoun on his own ,it must be all M8 leaders together org......

Obviously our sea nowadays needs to be all cleaned out...we have the world's best shore and the worst poluted one...I beleive that the hard part now relies on the ministry of environment.

the environement ministry exists only to appear civilised and pretending to care, but it has nothing to do with preserving the environement! just to give a ministry to someone and please his party that s all...
if this ministry was really working we would see it but just look at lebanon= it s getting more and more polluted and concrete everywhere!

the filthy zionist scum hallucinate that they know why our environement ministry exists.

Handle this quick , whoever it may concern. Lebanon cannot remain falling into the abyss like this. Red diesel scandal, no electricity, rivers of blood ,shit or chemicals, politicians betting on sides without anything sure. People living in extreme poverty whether sunnite, chiite or druze, and of course, lebanese immigration every year. If only our people were all united to bring EVERYBODY down.

The fish celebrating Holi the Hindu festival of colors a little early .

REVELATION {16:3} And the second angel poured out his vial
upon the sea; and it became as the blood of a dead [man:]
and every living soul died in the sea.