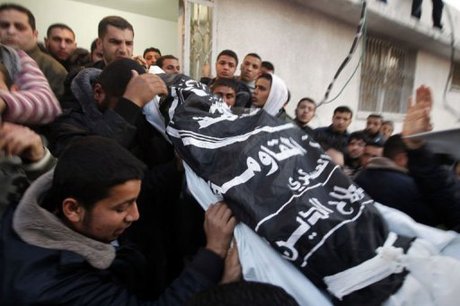 Israel's assassination of a top Gaza militant, which brought hundreds of rockets raining down on the Jewish state and the danger of further escalation, has left some wondering if its policy of targeted killings is still effective.

Since Friday, when an Israeli air strike killed Zuhair al-Qaisi, head of the Popular Resistance Committees, 23 Palestinians have been killed, most of them militants, prompting armed groups to fire more than 200 rockets at southern Israel, confining a million people to bomb shelters.

For some Israeli analysts, the all-too-familiar flareup, sparked once again by Israel's targeting of a militant leader in Gaza, is proof that the targeted killing policy simply does not work.

Not only do they fail to prevent militant acts, but they also endanger civilians on both sides who suffer the ensuing escalation, he said.

"It was clear to those who planned the killing that it would result in rockets, and a million people sitting in bomb shelters and safe rooms without being able to move," said Pedatzur, who directs the Centre for Strategic Dialogue at Netanya College.

Adopting a policy of taking out anyone planning an attack on Israel was limitless, he said. "If that's the case, you need to kill hundreds of people planning attacks -- where do you draw the line?"

And such a policy did little to deter militants from further violent activity.

"It's obvious that when you kill one -- another will come in his stead," he said. "Such killings only increase these groups' motivation to act against Israel."

But in Gaza, where the fallout from such a policy has been keenly felt over the past 72 hours, experts say the targeted killings are working.

"It is definitely a policy that aims at paralysing these groups and stopping them from carrying out future attacks against Israel," he told AFP.

In such groups, which tend to have a very centralised structure, taking out the top commander "definitely has a very effective and negative impact on their operational methods," he said.

And although the groups are capable of quickly replacing assassinated leaders, it still takes some time for them to become operational again, and replacing them sometimes creates internal problems, he added.

"Targeted killings are not the preferred mode of operation, arrest for interrogation is," he told AFP. "We don't know how to interrogate dead people, only live ones."

But if an arrest was out of the question, as in the case of Qaisi, and the person was planning an attack, then the alternative was a targeted killing, said Dichter, who is now an MP for Israel's centre-right opposition party, Kadima.

The escalation which inevitably follows targeted killings is one of the elements taken into consideration by top officials involved in approving such operations, he said.

"You need to be convinced, and to convince others, that the damage the individual will cause is severe enough to justify a targeted killing, even though it is known that it could cause an escalation," said Dichter, who was one of those tasked with approving such operations when he served as Shin Bet chief.

He believes the current rocket fire on southern Israel is a far softer blow than that meted out by militant groups during the second intifada, when an Israeli assassination of one of their leaders would often unleash deadly suicide bombings.

"But in just one suicide bombing, you could have a higher number of fatalities, not to mention wounded."

"There is not an endless number of commanders and trained militants, and you can definitely hit their morale when you explain to them that there is no safe place for them," he said, stressing the destabilising effect of such operations.

"A cautious terror group is one that does less."