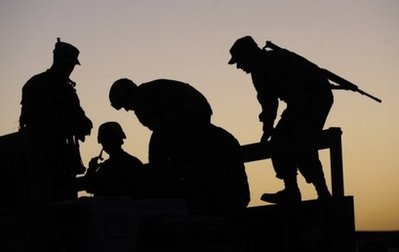 A suicide car bomb attack killed an intelligence agent and wounded 26 other people in an Afghan town on the Pakistan border Thursday, officials said, in the latest in a wave of blasts.

The explosives-packed vehicle with two bombers inside blew up in Spin Boldak after intelligence agents acting on a tip-off opened fire in a bid to stop it, Lutfullah Mashal, a spokesman for Afghanistan's national spy agency, said.

"We had intelligence that it was coming. The car was located, there were two suicide bombers in it. Our officers shot at it and killed one of the bombers after it did not heed their order to stop," he told Agence France Presse.

"The second bomber was injured and he detonated his suicide vest, also setting off his friend's vest and the bombs in the vehicle."

Mashal added that one of the agents involved in the hunt in Kandahar province was killed and several other security officials were injured in the blast.

In the last three weeks, more than 100 people including many bystanders have died in six large blasts.

On Saturday, the country witnessed its worst attack since June when 38 people died in a suicide attack on a bank in Jalalabad, eastern Afghanistan.

Southern Afghanistan is seen as the focal point of the war between the Taliban and international and government forces, which has now been running for nearly 10 years.

Kandahar province is the birthplace of Taliban leader Mullah Mohammed Omar and the militia's spiritual home. It borders Pakistan, where the militant Islamists are suspected to have rear bases.

Earlier this month, 19 people including 15 police and an intelligence agent were killed in a string of attacks focused on police headquarters in Kandahar city claimed by the Taliban.

And in January, 17 people including a police officer died in Spin Boldak in a blast at a public bath.

On Wednesday, the outgoing U.N. deputy special representative of the Secretary General for Afghanistan said security in Afghanistan was "at its lowest level" since the Taliban were ousted from power by a U.S.-led invasion in 2001.

Elsewhere in Afghanistan Thursday, a police commander said he had opened an investigation into possible civilian deaths after an air raid killed five armed men on a mountains northeast of the capital Kabul.

The probe was launched after villagers alleged the men were civilians hunting in the mountains of Alasai district in Kapisa province, provincial police chief Abdul Hamid Arkin told AFP.

"Five people have been killed. They were observed from the air to be carrying weapons on the mountains. They were targeted and killed," he said.

"Now our intelligence agencies are investigating to find out whether they were civilians or armed members of the Taliban."

A spokesman for the International Security Assistance Force (ISAF) said they were looking into what had happened.

President Hamid Karzai alleged this week that international forces had killed more than 50 civilians in air strikes in Kunar, east Afghanistan. ISAF denies the charges and says it is investigating the claims.

On Tuesday, Afghan officials said the force killed another six civilians in a raid on militants in the neighboring province of Nangarhar. ISAF is investigating that incident too.