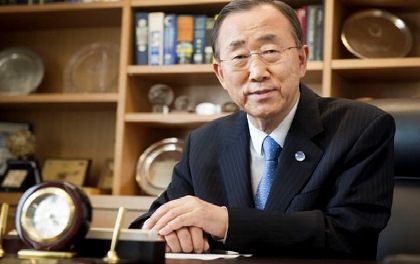 U.N. chief Ban Ki-moon has expressed serious concern over the repercussions of the Syrian crisis on the security and political situation in Lebanon.

In his semi-annual report on the implementation of U.N. Security Council resolution 1559, Ban condemned the violence along the Lebanese-Syrian border which has inflicted scores of casualties.

“Such actions are not acceptable,” he said about the death of several Lebanese by gunfire from the Syrian side of the border. The latest casualty was al-Jadeed TV cameraman Ali Shaaban whose vehicle came under a salvo of gunfire in the Lebanese northern border area of Wadi Khaled.

Ban urged the Syrian government to stop all such actions and respect the sovereignty of Lebanon and the safety of its territory in accordance with resolution 1559.

While expressing his serious concern over the effect of the Syrian crisis on the security and political situation in Lebanon, the secretary-general urged all Lebanese to safeguard Lebanon against the potential consequences.

He also expressed fears on the increasing political polarization in Lebanon due to the turmoil in Syria. However, Ban lauded the government of Prime Minister Najib Miqati for its efforts to ensure that the negative impact of the crisis in Syria on Lebanon is limited.

The report reiterated that the presence of Hizbullah and other armed groups on Lebanese territories was impeding the implementation of resolution 1559.

It said Hizbullah's arms posed a key challenge to the safety of Lebanese civilians and to the authority of the government and called on the group to complete the transformation into a solely Lebanese political party.

Ban also condemned the murder attempt against Lebanese Forces chief Samir Geagea, saying any effort to create instability in Lebanon by carrying out political assassinations is “not acceptable.”

Earlier this month, Geagea said he escaped an assassination attempt after snipers missed him as they fired at him from long distance while he was walking in the garden of his residence in Maarab.

Resolution 1559, which was adopted in 2004, calls for the disbanding and disarmament of all factions in Lebanon.

Ban Ki must be living on the Moon, and this is how he got his name.

How can Lebanon have sovereignty when Syria won't allow border demarcation. The Hezz won't allow it either. The both want gray edges so if caught killing or transporting weapons, there is no clear mark if it was Syrian or Lebanese soil.

Very true, that the M8 regime won't declare their desire for a border. They are a fraud full of corruption, electricity stealing, drug dealing, and murder.

I just want to know, when, when will the world and especially this incontinent UN will learn who is Assaad and the Baath Party and that yo u cannot deal with these criminals. They are pure criminal, who need to be strung up and hung in the middle of damascus. These people (didnt mean to call them people that's an insult to humanity)dont understand rules and democracy and freedom, they only understand power, no different then Saddam, so why is Assad being treated differently then Saddam. the west especially the US have already lost credibility in the ME, as they encourage people to rise and demand their freedom and do away with their tyrants.

when the people of lebanon, then syria did, they were abandonned by the US and the west. that created the vacuum, which will eventually be filled by the terrorist groups who seize the oportunity to spit their rethoric and lies that they are there to help the people. Then the audacity of teh west and US to wonder where the terrorists are coming from, that's a failure and a joke by the western inteligence and politicians. god help these people.