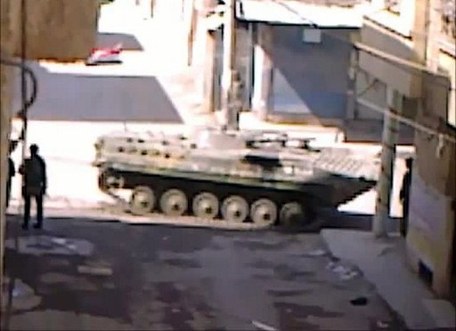 A Fatah al-Islam Lebanese militant, who was accused of targeting the Lebanese army, was killed in the Syrian city of Qsair after detonating himself accidentally, the Time reported.

According to a fellow fighter, who goes by the nom de guerre of Abu Ali, Abdul Ghani Jawhar had been preparing an explosive device to be used against the Syrian army when it went off prematurely, killing him instantly.

“We wanted to send his body back to Lebanon but we couldn’t because it was torn into pieces,” Abu Ali told Time.

Instead the rebels were forced to bury what was left of him in a neighboring garden.

But Lebanese media reports said that Jawhar, who is wanted for targeting the army in three bombing attacks in 2008, was killed during clashes with the Syrian military.

According to al-Akhbar daily, Jawhar arrived in Qsair two weeks ago after escaping the southern Palestinian refugee camp of Ain el-Hilweh.

The Lebanese army battled an uprising of Fatah al-Islam in the northern Palestinian refugee camp of Nahr al-Bared in the summer of 2007. The fighting killed some 400 people, including 168 soldiers.

Premature Detonation ... I thought they have created a medicine for that! looool