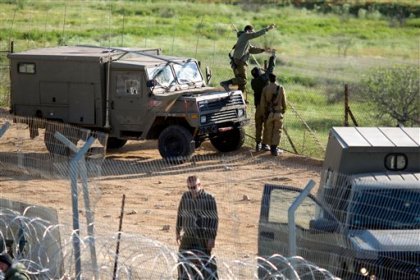 The Force Commander of the United Nations Interim Force in Lebanon (UNIFIL), Major General Paolo Serra, chaired on Wednesday a tripartite meeting with senior officials from the Lebanese and Israeli armies at the U.N. position at Ras al-Naqoura, announced UNIFIL in a statement.

“It was a special tripartite meeting called at the initiative of the force commander and with the agreement of the representatives of the parties to discuss the security situation in the Shabaa Farms area following the Israeli army’s decision to construct a patrol road,” it said.

Following the meeting, Serra stated: “UNIFIL’s focus is to find the best ways to de-escalate the tensions in this area and maintain the cessation of hostilities, while ensuring the continuing respect for the Line of Withdrawal and maintaining calm in the area.”

“We have had a good discussion and both parties are clearly interested in enhancing security in the area and are committed to working with UNIFIL,” he added.

Asked about the position of the Lebanese army on this issue, the UNIFIL commander replied that the army delegation at the meeting had expressed a firm standpoint and explained in detail its point of view concerning the matter.

Serra revealed that he will continue discussions with the parties on the issue on a bilateral level and urged the parties to continue to utilize UNIFIL's liaison and coordination mechanism to ensure that the cessation of hostilities is maintained.

He added that UNIFIL is committed to the implementation of its mandate and will spare no effort to carry out its tasks under U.N. Security Council resolution 1701.

Israel is to start building a wall along part of its border with Lebanon next week to shield the northern town of Metulla, Channel 10 television reported on Monday.

It said the wall, more than two kilometers long and 10 meters high, was also aimed at preventing clashes between Israeli and Lebanese border forces whose posts are often just meters apart.

Fencing business is the way to go in Israel. You can make big money with these government projects. lol. Israel is isolating itself from the rest of the world literally...gotta love it. It's jailing itself. Bl00dy hilarious.