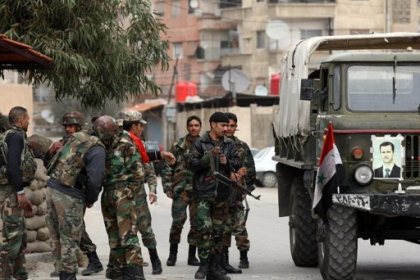 Syrian troops killed at least 10 rebels on Saturday in fighting in the Damascus region, the Syrian Observatory for Human Rights said.

The agency added that "one of the military units stationed off the coast of Latakia thwarted an attempt by an "armed terrorist group" trying to infiltrate from the sea," quoting an unnamed military source.

Near the city of Latakia, clashes broke out between Syrian troops and armed opposition forces in the village of Bourj Islam near a presidential palace early Saturday morning, the Observatory and activists reported.

Activist Sema Nassar said the fighting began as "officers and soldiers of a military base near the presidential palace ... deserted with their weapons."

"Loud explosions were heard as far as the city of Latakia," Nassar added.

The fresh violence comes on the heels of Friday clashes, which left 19 dead, including 10 civilians, according to the Observatory.

A suicide car bomb exploded Friday in Damascus, leaving two dead, according to the watchdog and 11 killed according to Syrian state media.

Major General Robert Mood, a veteran Norwegian peacekeeper, headed to Damascus on Saturday to take charge of the U.N. monitoring mission, which is expected to expand to a 300-strong force.

The uprising against the Syrian regime has left more than 9,000 dead since March last year, according to U.N. figures.

And the UN observers keep observing !!!!

Hence their title, "U.N. Observers." What do you want them to do?