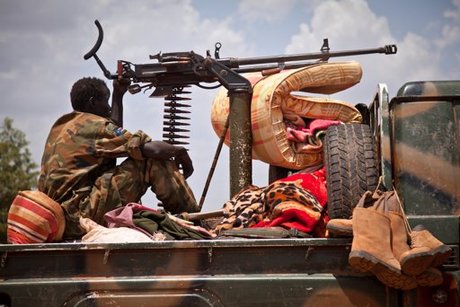 Four foreigners investigating the debris from recent fighting between Sudan and South Sudan have been captured in the Heglig oilfield area, Khartoum's military said on Saturday.

Sawarmi Khaled Saad, the army spokesman, identified the foreigners as a Briton, a Norwegian, a South African and a South Sudanese.

He was speaking to reporters after the four were flown to Khartoum for "more investigation."

"We captured them inside Sudan's borders, in the Heglig area, and they were collecting war debris for investigation," Saad said at the airport.

He added that all four had military backgrounds, and were accompanied by military equipment and a military vehicle. He did not elaborate.

"This confirms what we said before, that South Sudan in its aggression against Heglig was supported by foreign experts," the spokesman said.

It did not allow reporters or other observers into the area during South Sudan's 10-day occupation of the oilfield, meaning the situation on the ground has been difficult to verify.

In the most serious unrest since the South's independence, Juba's troops occupied Sudan's main oil region of Heglig for 10 days, a move which coincided with air strikes against the South.

Sudan declared on April 20 that its army had forced the Southern soldiers out of Heglig, but the South said it withdrew of its own accord.

Each side blames the other for damaging the oil facility, which provided about half of Sudan's oil output and is now shut down pending repairs.

"While the full story behind the withdrawal is not yet known, there is mounting evidence that the withdrawal was due to a mixture of fierce diplomatic pressure and military losses following a heavy bombing campaign by SAF on SPLA positions in and around the town," said the Small Arms Survey, a Swiss-based independent research project.

It was not clear when the foreigners were detained.

They arrived in Khartoum on a civilian aircraft and were escorted directly to a minibus.

An Agence France Presse reporter saw that they were not handcuffed, but their clothes were dusty.