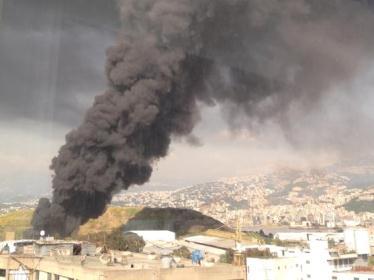 A team from Greenpeace investigated a fire at the Bourj Hammoud-Karantina dump that caused a thick black smoke that reached all the way to Beirut’s southern suburbs, the non-governmental organization said on Sunday.

The team of experts discovered that Friday’s fire was caused by the burning of tires to extract iron and sell them to make gains, Greenpeace said in a press release.

The NGO lauded the Civil Defense Department for controlling the blaze and preventing it from reaching nearby gas tanks and consequently avoiding a “humanitarian and environmental disaster.”

The team took photographs of hundreds of burned tires, it said.

Campaigns official Rayan Makarem said the incident is an example of the “environmental crimes” committed in Lebanon.

Waste should be either recycled or turned into fertilizers to limit the chances of fires that cause pollution in the air, soil and water, he said.

I hope Greanpeace follows up the matter and makes the perpetrators pay for their crime. The laxity of the government in these and other issues that concern the people, have become unbearable. I wonder why we even elect mmebers of parliament who do not even bother to protect the basic rights of their people.

Of course.
Hizbollah s thugs are behind it.
Ashraf el ness.

in Lebanon we never find WHO the culprit is.... that is SAAADDDD

naharnet likes removing comments all the time... unfortunately this forum is not a free speech arena

I say it is hizbollah s thugs.
Donno why comments are removed?

Who cares who did it? We should care that whoever it is gets jailed, and an example made out of this criminal act.

We should campaign to ensure this does not go unpunished by the law.

The gov. should confiscate everything and sell metal. The benefit should then be used to clean up. Clean up what? We have a lot of choices in Lebanon....

You guys r missing the bigger picture here. Who cares who did it and whether they go to jail or not. The question you should be asking yourselves and the government "WHY is the karantina there? How can you accept having a mountain of garbage right in the city causing all the pollution it is causing. Why are the sewage systems directed to the beaches where people go swimming and fishing? Isn't it the governments responsability to create a proper garbage dump site far away from the city and the people? And all you care for is Who caused the fire and that they should be jailed...I'll tell you who should be jailed, every single one of those zou3ama should be jailed because they DO NOT CARE about the ppl and Lebanon, they just care about themselves and their pockets. And what are the lebanese ppl doing, hehe, ana ma3 Aoun, ana ma3 jumblat, ana ma3 heda wu haydak. Ya 3aybeshoom. Wake up ppl, just for a moment wake up and try to use that head that GOD gave you.

thank you slash!! yes it surely is the LF wazawez better known as zouzou 2ebbazzzz

H, the "bad food" and "bad medeicine" were present in Lebanon for decades, however with the new gov in place, they were able to arrest allpeople dealing with that, Mazen bsat, Natour...(funny how all of those are Harriris minions)