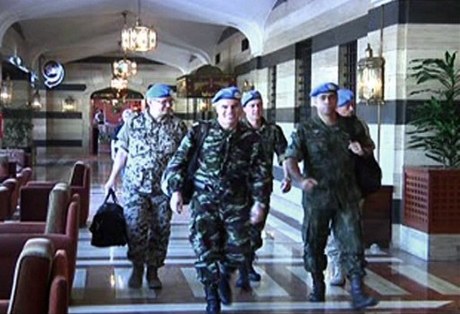 Syrian security forces have kept heavy weapons in cities in breach of a U.N.-brokered cessation of hostilities, but the government and opposition both have committed truce violations, a top U.N. official said Tuesday.

Ladsous insisted, however, that the monitors were having a "visible impact" in cities where they have been allowed to go.

Withdrawing weapons and troops from Syrian cities was a key part of a six-point peace plan agreed by President Bashar al-Assad and U.N.-Arab League envoy Kofi Annan. Syria has told the U.N. that weapons have been pulled back.

Syria has told the monitors that the armored carriers have been disarmed but this has not been verified, Ladsous added.

The U.N. Security Council has approved a 300 strong force to monitor the cessation of hostilities which started on April 12 but has barely held.

Ladsous said only 150 monitors have been promised by U.N. member states so far and that Syria has refused visas for three monitors. He refused to give the nationalities of the three, but at least one of the officers is already in Damascus serving in the U.N. Truce Supervision Organization.

"If there is not sufficient cooperation on (visas) from the Syrian authorities, of course we will report to the Security Council," Ladsous warned.

Despite the slow pace of finding monitors, the U.N. official said he was "confident" that the full 300 force would be found and would be in Syria by the end of May.

Western nations have expressed strong doubts, however, that Assad's government will stick to the six-point plan proposed by Annan. The plan calls for the cessation of hostilities and moves toward a political process.

"All the parties need to take further steps to ensure a cessation of violence in all its forms," he said.

"The important fact is that violations do come from both sides," he said while refusing to say whether one side had committed more breaches.

Without giving details, the U.N. under secretary general also said that opposition groups had been involved in incidents with the monitors.

"There have been several incidents of various concern, in particular with some opposition members," Ladsous said.

Annan is to brief the Security Council on May 8 on events in Syria, where the U.N. says well over 9,000 people have died since an uprising against Assad started in March last year.