Ban Urges Lebanese to ‘Make Every Effort to Restore Calm’ 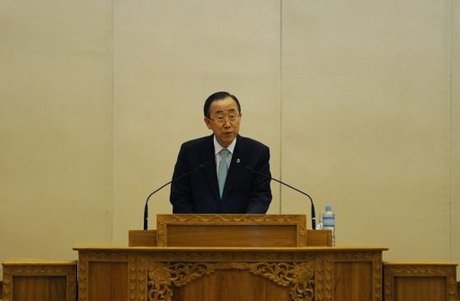 U.N. chief Ban Ki-moon on Monday appealed for calm in Lebanon following clashes involving pro- and anti-Syrian groups, which has sparked fear of a widening conflict.

The Secretary-General, through a statement released by his office, said he is "concerned by the tensions in Lebanon in recent days and calls on all parties to make every effort to restore calm."

Violence erupted in Beirut after Lebanese troops shot dead Sheikh Ahmed Abdul Wahed and his companion Sheikh Mohammed Merheb at a checkpoint in the town of al-Kweikhat in north Lebanon.

Protesters blocked roads and burned tires in the northern province of Akkar following the killing of the clerics, and by evening the unrest had spread to Beirut.

Washington also expressed concern over the killings on Monday and urged restraint.

Derek Plumbly, U.N. Special Coordinator for Lebanon, was "engaged on the ground, encouraging all concerned to work for sustained calm and stability in the country."

He also stressed the "need for Lebanon's continuing stability, and encouraged "all Lebanese parties to strengthen their efforts to date to overcome any emerging challenges on the ground."

Ashton said in a statement she was "closely following the events in Lebanon and is deeply concerned at the outbreaks of violence in Tripoli and Beirut, which have led to the death of several persons and injury of dozens of others."

"These events must be duly investigated and followed by Lebanon's law enforcement authorities.”

Ashton said she was "also concerned at the killing of two local dignitaries by soldiers of the Lebanese Armed Forces in the Akkar region. The circumstances of their death must be promptly investigated and appropriate measures taken that respect the rule of law."

Ashton said she supported "all efforts aimed at maintaining order, defusing tensions and ensuring calm and security for all, throughout the country" and reaffirmed "her commitment to Lebanon's sovereignty, independence, unity and stability."